A Trick of The Light by Lois Metzger book review 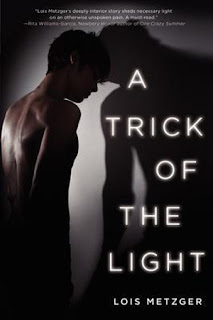 Mike Welles had everything under control. But that was before. Now things are rough at home, and they’re getting confusing at school. He’s losing his sense of direction, and he feels like he’s a mess. Then there’s a voice in his head. A friend, who’s trying to help him get control again. More than that—the voice can guide him to become faster and stronger than he was before, to rid his life of everything that’s holding him back. To figure out who he is again. If only Mike will listen.

I picked up this book from the new releases section at the local public library. Actually I didn't even look at the cover of the book or the title. Sometimes i like that..not to know what im gonna read.
So the books starts with Mikes subconscious describing a scene with Mike and his friend Tamio. Initially i thought that someone else was looking at Mike I had no idea that Mike;s self narrated the whole book and it took me some pages to understand it.

A Trick of The Light is a really really weird read. Last year i went through some excruciating dieting myself, taking out valuable food and eating only greens - which resulted in a life that maintaining control and never exceed the 1200 calories that i had set myself as a daily nutrition intake. Sometimes i had to go to the bathroom and throw up due to remorse that i ate 200 more calories. Does it sound crazy? Exactly that's what i saw in this book - MYSELF EXACTLY A YEAR AGO.

As we follow Mike through the book through his mind;s eyes we see a totally healthy boy going through their parents broken relationship and eventually divorce. He finds himself alone and completely neglected by his family. To his weakest point his mind makes him believe that everyone around his is the enemy. No one want good things to happen to Mike and that starts when Mike sees himself in a weird mirror that he is fat and later a comment that comes from his coach make Mike a completely different person. He is starting to work out and cut back on his nutrition intake. His only friend seems to be a girl called Amber that plays a huge role over Mikes downfall.

As the books moves on we see the aspects of anorexia and what can happen to people. How they change completely (body and mind) and how they see their surroundings. I never thought that this book will show the hidden aspect of anorexia and that it can affect boys too. The author did a really good job describing Mike and his thoughts and inner demons but also i loved that she payed attention to the fact that you can be helped and recover. She highlights the rehab centers and the actions that they take but also throws a message towards bad parenting and how a parent improves with methods after his child suffers an illness implying that parents should always be responsible and caring with the children.

She finishes a book with a great paragraph and i have to say that i will read this book sometime soon.
Posted by The Accidental Reader at 6:21 PM