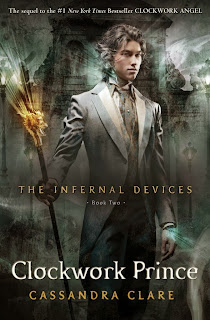 True love is shrouded in secrets and lies in the #1 New York Times bestselling second book of the Infernal Devices trilogy.In the magical underworld of Victorian London, Tessa Gray has found safety with the Shadowhunters. But that safety proves fleeting when it becomes clear that the mysterious Magister will stop at nothing to use Tessa’s powers for his own dark ends.With the help of the handsome, tortured Will and the devoted Jem, Tessa discovers that the Magister’s war on the Shadowhunters is deeply personal and fueled by revenge. To unravel the secrets of the past, the trio journeys from mist-shrouded Yorkshire to a manor house that holds untold horrors. When they encounter a clockwork demon bearing a warning for Will, they realize that the Magister knows their every move—and that one of their own has betrayed them.Tessa is drawn more and more to Jem, though her longing for Will continues to unsettle her. But something is changing in Will. Could finding the Magister free Will from his secrets and give Tessa answers about who she really is? As their search leads to deadly peril, Tessa learns that secrets and lies can corrupt even the purest heart.

Review:
As always I don;t know what to say about Claire's books. The use of words and the depth of the characters take you to 1880's London and make not to want to leave.
First of all, this book is a little more different from the first one. To be honest I thought that I would drop the first one because (let's face it) it was a little bit boring. This one though is so much different. It's so much more intense and has so many scenes that are romantic and sexy but also so so so annoying because we all know Claire and how she likes to torture her characters (and the readers too). Claire takes the love triangle in a whole other level. It makes you wanna rip the pages from the book with utter madness. I don;t want to spoil it for you but there is going to be a lot of disappointment in the end for most of us.
The depth of the characters is amazingly good, I love the bromance of Jem and Will and I hate that both of them love Tessa and each one of them is so proud to talk to each other about their feelings until the very end where everything goes to hell and it's too late for a certain one.
For some reason Will reminds of Jace (Mortal Instruments) and to be honest although a little fun and familiar it is kinda boring, at least Claire would change Will a bit and make him more of a...gentleman since we are talking about Queen Victoria's London.
Tessa on the other side is a whole new characters (at least for me). Altough brave and generous, she seems to lose it big time in the end of the book giving the reader the impression that she is doing things she doesn't want to do but need to be done out of pity...and that is bad. But as a weak person that I am Tessa has a special spot in my heart for being so good.
Jem in this books is more adorable than ever and more sexy than ever all at the same time. Although, I will never forgive him for doing what he did.
This is a really sad book and I am afraid that the next one will be much much worse. Overall Claire did an incredible job with the book and Im not  disappointed  at all at it because honestly it drives you crazy with anticipation and pure agony.
Posted by The Accidental Reader at 7:24 AM