Girl From Above: Trust (The 1000 Revolution Book 4) by Pippa Dacosta 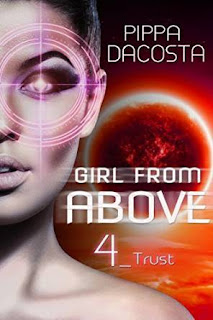 Name: Girl From Above: Trust

Author: Pippa Dacosta
Series: The 1000 Revolution
Publisher: Self Published by Pippa Dacosta
Publication Date: March 1, 2016
Number of Pages: 224
Rating: 5 awesome stars! my heart is breaking but it feels so good.


“I didn’t sign up to die a hero.” ~ Caleb.
Chen Hung closes in.
The nine systems hang perilously close to a second fatal Blackout.
The lives of billions of people are at stake.
Does Captain Caleb Shepperd have what it takes to save the nine systems, or just himself?
Caleb never wanted to be a hero. That was his brother’s dream. Keep it simple, get away clean. Flying a ship packed with explosives into Janus orbit station isn’t simple, and there ain’t no way he’s getting away clean.
He knows the Fenrir Nine have sent him on a suicide mission, but he’s not about to lay down his life for them. He’s not a hero, and he sure ain’t no fool despite what the Nine must think. There’s another way, he just has to figure it out before the bomb he’s carrying ticks down to zero.
One survived; against the odds, the brutality, and the betrayal, she survived, but inside, in the part of her that’s real, she’s broken. Broken in ways that cannot be fixed.
She’s going back to where it all began, to Janus—to Chitec, to the ‘man’ who made her. It will take all that she is, all that she was, and all that she could be, to save the nine systems from the synthetics.
She will not fail.
“I am One, and I cannot be stopped.” 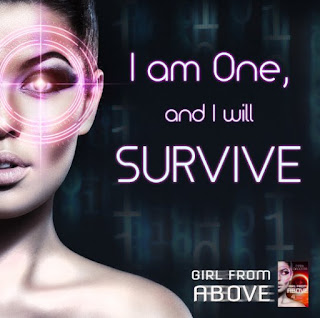 now that I finally have some free time after quite a few hectic months (though really I feel as if I always say I have a hectic time, I think the right thing to say is that I can finally, if only for a while, focus on some of the things I love- like, books) I am finally going to attempt at a review of this book and the entire series.

Let's talk about trust, shall we? what is trust? do we really trust the people around us?
I know in my life there are some people I most definitely don't trust. Then there are those I am neutral about, which is really most people, and there are those few that I really do trust.


As for the neutral part that's a given. As for those I trust- why do I trust them? I think it's because I know them well enough to understand them, their motives, I know their inner workings. thus I can trust them. they still might hurt me, but really there are few things they could do that would really surprise me and change the whole way I see them.


Girl from Above is not like that. One trusted someone she shouldn't have and now she is paying the price. Caleb can't trust Fran and let's face it, Haley couldn't trust Caleb.


Can Caleb trust One?
I think so. but this trust is also limited. there are things One would or wouldn't do that Caleb would find hard to accept. truthfully, I think the main problem is Caleb's own insecurities but that's another matter.


This book is the final fight. alliances are made and and shifts and break. Revenge is an all around dish served for all. Goals, wishes, targets- they all come to a final conclusion and some big unfair and totally heartbreaking sacrifice. Rumpelstiltskin in Once Upon a Time said that "all magic comes with a price"
truth be told, "everything comes with a price".


Fact is, Pippa is awesome, Pippa is mean and cruel and evil. I adore Pippa.


As for the series as a whole-


One was a great protagonist. I can't help but love her. She was determined and cruel and calculated and kind and loyal and innocent. she was a mixture, a machine but oh so human.
and Caleb is a twisted cold hearted bastard. but he is more than that. he is broken. he hurts. in a way he is a lost man. he is not a decent guy, but he is someone that tries to act decent every once in a while and just doesn't know how. he is a rebel. he is complicated (if you right in Facebook it's complicated what you actually mean is that you are dating Caleb. he is his very own brand of complications)


their story was one of a kind for me.


the ending was perfect, even if my little battered, broken, frozen heart almost couldn't handle it.


I have only one problem- Fran.... she's cool, but, well, I guess you could say I have issues. Pippa and I emailed about it.


The thing is that there are no hundreds upon hundreds of pages full of angesting, emotions and over all emotional pain. Emotion exist but do not take a front center and certainly are not discussed all the time if at all. Yet, there are emotions, there is genuine pain and genuine feelings. The relationships are messed up and complicated at best. The relationships are almost realistic. I say almost realistic because not every relationship is that complicated. Love has more than one layer and truth is an abstract term. what about truth in love? hell if I know.


And I love this series so much I had to share it with the people in my life. my friend read the first book (she loved it). my father also read the books. he said they were good. however  he had two problems:


she's wild and lively and crazy and feisty and human. personally I prefer One (I can relate to her better).


my father said he couldn't understand him. I tried to explain to him.


Caleb came from a broken home, as a result he needed to prove himself, he needed to achieve and overcome his insecurities and past wounds. Which is why Caleb was extremely ambitious.


his mourning over Haley is not a mourning over a dead beloved who was his soul mate and to whom no one could ever compare.
Caleb's mourning over Haley is his mourning over himself.
Caleb was so ambitious, dating Haley was a step in his ladder. since she was kind, smart, good looking and rich that wasn't too complicated or a hard thing to do.
still, something happened. because of his ambition Caleb stood on the sidelines one night and watched something horrible happen. he broke a trust and lost a part of his humanity. The thing he did wasn't fruitive and Caleb ended up in jail.
So Caleb did something horrible because of his ambition and he did it in order to further himself up the ladder. he paid a terrible price but did not recieve the prize he hoped for, instead he was punished. Suddenly looking in the mirror didn't feel so good anymore. what he saw was something he didn't recognize or liked to see. And so, Caleb's aiding the rebels is part of Caleb trying to get some of his humanity back, it is about Caleb seeking redemption.


I really have only one complaint. this series about space has no aliens. it could have been cool if there were some. besides that- pure awesome and one of my favorite series ever.

many thanks for the ever awesome Pippa Dacosta for the ARC. she's a queen.
Posted by Sharon at 11:20 AM

Email ThisBlogThis!Share to TwitterShare to FacebookShare to Pinterest
Labels: 5 stars, arc, girl from above, pippa dacosta