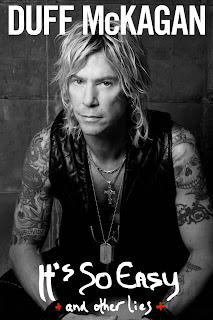 ''A founding member of Guns N’ Roses and Velvet Revolver shares the story of his rise to the pinnacle of fame and fortune, his struggles with alcoholism and drug addiction, his personal crash and burn, and his phoenix-like transformation via a unique path to sobriety.
In 1984, at the age of twenty, Duff McKagan left his native Seattle—partly to pursue music but mainly to get away from a host of heroin overdoses then decimating his closest group of friends in the local punk scene. In L.A. only a few weeks and still living in his car, he answered a want ad for a bass player placed by someone who identified himself only as “Slash.” Soon after, the most dangerous band in the world was born. Guns N’ Roses went on to sell more than 100 million albums worldwide.
In It's So Easy, Duff recounts GN’R’s unlikely trajectory to a string of multiplatinum albums, sold-out stadium concerts, and global acclaim. But that kind of glory can take its toll, and it did—ultimately—on Duff, as well as on the band itself. As GN’R began to splinter, Duff felt that he himself was done, too. But his near death as a direct result of alcoholism proved to be his watershed, the turning point that led to his unique path to sobriety and the unexpected choices he has made for himself since. In a voice that is as honest as it is indelibly his own, Duff—one of rock’s smartest and most articulate personalities—takes readers on his harrowing journey through the dark heart of one of the most notorious bands in rock-and-roll history and out the other side.''
Review:
I don't know what to say about this book or the author. Duff Fucking McKagan has been a huge inspiration to me since my early teens. Guns N' Roses is my favorite rock band and i love all the members but a little more Duff. I always knew that rock has to do with drugs but that was something else. To be honest i never read anything like that in my entire life. Neon Angel by Cherrie Currie is not even close to the things described in this book.
When i started the book i didn't know what to expect, i just wanted to read about Guns N Roses and the life they led before they become famous and its true that Duff did a great job with describing his early childhood/teen years and how everything shaped around the name of GNR. I was surprised from a lot of things and i needed more and more and more. I loved the way he wrote.
As the book progressed we could see how deep in addiction Duff and his bandmates fell and how fame and money eventually changed everything. How the band mates got estranged from each other and how a certain member suffered from megalomania which resulted in the band to eventually split in 1997. Although the book answered a lot of questions it created new ones and at some points i found myself screaming Why????
I would loved to have read a little more descriptive situations and especially about the fallout between Axl and Slash. For obvious reasons there is no sex scene descriptions in the whole book (im sure no rock star would want their daughters read about their fathers um....experiences (?)).
I was amazed on how Duff got out of the cocaine-alcohol addiction pit and did his best to recover and how to this day he is still suffering from his past. Although i think Duff doesnt realize it he got out from one addiction with another - exercising and i think although this is kind of healthy it can also destroy you if you are not careful.
The book also focuses on the musical career of Duff before and after GNR and the differences that he saw. How people accepted him back then and how they accept him now - everything is easy when you are a legend.
Duff did a great job with a book and i would totally recommend it to any GNR fan out there and not only.
Posted by The Accidental Reader at 8:50 PM