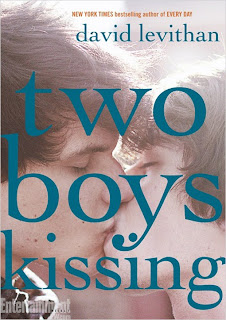 New York Times  bestselling author David Levithan tells the based-on-true-events story of Harry and Craig, two 17-year-olds who are about to take part in a 32-hour marathon of kissing to set a new Guinness World Record—all of which is narrated by a Greek Chorus of the generation of gay men lost to AIDS. While the two increasingly dehydrated and sleep-deprived boys are locking lips, they become a focal point in the lives of other teen boys dealing with languishing long-term relationships, coming out, navigating gender identity, and falling deeper into the digital rabbit hole of gay hookup sites—all while the kissing former couple tries to figure out their own feelings for each other.

I finally finished the book after a hectic week and i dont know how to rate this book.

The book starts with a gay prom and how it got organised. We get to ''meet'' the main characters of the book that soon we will follow through their battle with anguish, inner demons etc.

I loved the fact that all the characters are being connected in the book through on event: The Big Gay Kiss (thats how i call it). Two boys decide to break the world record of the longest kiss by kissing for 32+ something hours in the front lawn of their school. And thats when everything start.

The gay couples around the book deal with their demons. Some of them try to make their families acknowledge  the fact that their gay, others avoid their families after being discovered and some of them battle with the social life that surrounds them. What they have is common is that each one of them finds refuge in the end.

What i found weird in this book is the narration. Some dead boys narrate the whole story referring to their selves as ''we'' which is kinda pathetic in the beginning but you will get used to it as i did. I liked the way Levithan chooses his words and tries to pass a message through this book: You are not the first one going through this, others been there too and there is always help even if you cant see it.

Also, i felt a little detached from the main characters probably because of the narration and if there was one thing that i would change in this book that would be it. Other than that everything was great and totally gayish but also gloomy at some point.

Definetely a good gay book that i would recommend.

Posted by The Accidental Reader at 5:33 PM