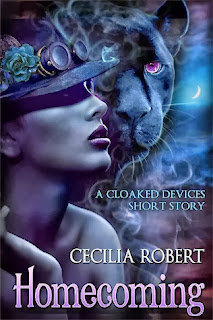 "Five years ago, twenty-three-year-old panther shifter Sera Czedar left her home and her newly mated groom in a humiliating position after a mating ceremony gone wrong. She built a new life for herself in Varselles, the City of Outcasts where shifters exiled from their clans in the Seven Kingdoms can go for sanctuary.

Five years ago, panther shifter Levian Grayson was abandoned on the bonding bed by his bride, Sera. After years of tracking her, he arrives in Varselles, intent on staking his claim on her once and for all, even if it means hauling her over his shoulder just to make sure that happens.

Sera has always known her homecoming would eventually catch up with her one day. The one thing she can’t bear to do is hurt Levian, which will happen as soon as he finds out the reason she left him. Is she ready to take that path? Most of all, will Levian still want her when the truth comes out?"
3 we are off to a good start stars!
First let me say, how gorgeous is that cover, right?
I am not a fan of novellas and short stories, especially when the mark the start of a new series. After all, writing a first book in a series is hard enough. A first book explains the world building and introduces the characters.
What about a novella? That from start is limited in space?
The answer lies before you- Cecilia Robert does a fairly good job in Homecoming but what we are left with I could summarize in one word-  tease
We get a glimpse to an interesting world- some sort of a parallel universe/planet where shifters are the majority and the minority of humans have some sort of elemental power. BTW, earth was destroyed, the shifters saved us. This new world has steampunk setting mixed with some wild west setting as well. All in all, interesting, but as we get only a glimpse I'd say it's a tease.
The characters are very well portrayed in the short time we have with them- each the sum of her actions, her words and history. Each has contradictions and depths to be explored.
The sexual tension between Sera and Levian is burning but even so we are left with a tease more than anything else.
As for the fight scene- they ended to fast. The story is written in the third person and the first chapter is annoying as hell, afterwards the pacing is better and fun to read.
I understand what the author tried to do, and she got me interested enough to want to read the sequel. Even so, as a first in a series it was supposed to lay the foundations for the next books and this one does that well. But as for standing on it's own- I don't think it does. This is a tease so you would want to read the next one.
A copy was provided by the Author through NetGalley in exchange for an honest review
This review also appears on: BookLikes, GoodReads, Amazon UK, Amazon
*Original pre review*
Well Well. I have some troubles with this one, but all in all, I can't wait for the next installment to come out!
review soon;)
Posted by The Accidental Reader at 1:04 PM