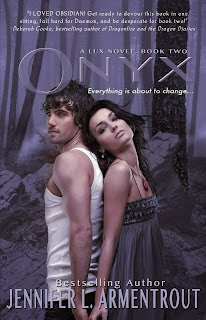 Being connected to Daemon Black sucks…Thanks to his alien mojo, Daemon’s determined to prove what he feels for me is more than a product of our bizarro connection. So I’ve sworn him off, even though he’s running more hot than cold these days. But we’ve got bigger problems.Something worse than the Arum has come to town…The Department of Defense are here. If they ever find out what Daemon can do and that we're linked, I’m a goner. So is he. And there's this new boy in school who’s got a secret of his own. He knows what’s happened to me and he can help, but to do so, I have to lie to Daemon and stay away from him. Like that's possible. Against all common sense, I'm falling for Daemon. Hard.But then everything changes…I’ve seen someone who shouldn’t be alive. And I have to tell Daemon, even though I know he’s never going to stop searching until he gets the truth. What happened to his brother? Who betrayed him? And what does the DOD want from them—from me?No one is who they seem. And not everyone will survive the lies…

As it usually happens with all good book series I immediately jumped from book 1 to book 2 in no time. I think I read this one within 6 hours or so and I am so so so excited.
It's been some time since the last time I actually read something so good that I had to devour it so quickly and to tell you the truth Onyx is one of my fav books.

Usually, when it comes to book series the second book tends to be the one where the couple separates or something happens to them...but that's not the case here...actually there was no couple to begin with. The author did more than an awesome job starving the readers for some romance and in this book we get rewarded finally!!! Katy is starting to realise that Daemon is not kidding with the whole I want you, I need you thing and starts to loosen up a little until she completely falls for him...in his embrace. They both keep secrets from Dee and Katy gets a little estranged from her because she wants to protect her until the inevitable happens. What happened in the end of the book I didn;t see it coming and I bet a lot of you wont either.

Meet Blake the new sexy guy at school that makes Katy act weird and date him....yup they went out together. As it turns out Blake has his own secrets and Daemon has a hard time trusting him with Katy.

The plot has a lot of twists and turns that I didn;t expect, things can be good and then turn ugly but that kept me reading because I was so excited about the unexpected. The writing is so intense and also you get to see the character's from a whole different perspective, it's just amazing because that doesn't happen really often.

Totally recommend it.
Posted by The Accidental Reader at 9:48 AM