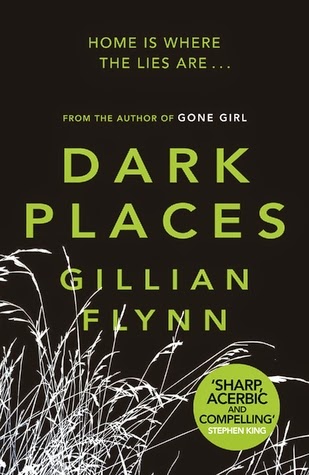 Libby Day was just seven years old when her evidence put her fifteen-year-old brother behind bars.

Since then, she had been drifting. But when she is contacted by a group who are convinced of Ben's innocence, Libby starts to ask questions she never dared to before. Was the voice she heard her brother's? Ben was a misfit in their small town, but was he capable of murder? Are there secrets to uncover at the family farm or is Libby deluding herself because she wants her brother back?

She begins to realise that everyone in her family had something to hide that day... especially Ben. Now, twenty-four years later, the truth is going to be even harder to find.

Who did massacre the Day family?

My Thoughts:
Dark Places is one of those books that linger in your brain for a while. You keep thinking about it again and again until your brain bleeds from the feeling of: That was fucking amazing.
I think this is my favorite book of the year, highly disturbing and dark with a pitch of macabre and thrilling detailing of the most chilling events.
It all starts with Libby Day a survivor from the Day family massacre back in the 80's. All these year she lived off the money people donated to her because they felt sorry for her, but money run out and she is in need of those, although, not too willing to either hear her lawyer or do something about the situation.
One day she is being contacted by a guy who participates in the Kill Club. A group of people who research various murders throughout time and they believe that her brother – who is in jail for her family's murder – is innocent. At first, Libby seems reluctant enough to go there and see what all this is about, because she is sure that her brother did it but soon enough those people will make interested because they are willing to pay for any information she can provide -and she needs the money- and also because they have some interesting theories about the real killer. And that's where the awesome story takes starts.
I was thrown in a world so complex and twisted and macabre that I could not believe what I was reading. Everyone seemed like the perfect killer. The story was told in alternative points of view, from present day Libby to deceased mother and brother back in the 80's before the murders. What unraveled in front of me was a mystery so mesmerizing that had me turning the pages like crazy.
The book covers everything from Satanism and sacrifices to drugs, to child molestation, to teenage pregnancy. It covers the theme of abuse and how a troubled teen can hide so much rage inside of him but at the same time be the most quiet and shy child out there. How someone can be completely paralyzed from fear that cannot even defend his own self and can easily be manipulated to do things he doesn't want to do or seem right to him. I love the fact that people who are afraid, are not actually afraid to point fingers to people they consider to be somehow weird and turn someone innocent into a murderer, a child molester etc etc, I like how the book shows you that nothing is what it seems to be and judging by fear is the worst one can do.
The characters are all really complex even the supportive ones play a role in the story and while reading this book you need to be really careful of details because they play a huge role in the development of the story. Libby was unique to me. The complexity and development of her character was truly fascinating and the same applies to her brother Ben. I felt like the characters reached their goal in the end and found peace.
The writing was magnificent. I could not put the book down, I felt every agony, every fear and every confusion in this book because every scene was so vivid, like I was in the book. You wont see the ending coming thats for sure, it was so unpredictable and jaw dropping that I was asking where it was coming from and did not see it. It gave a great closure to the book.
If you love mysteries and suspense then Gillian Flynn is the author for you and its sure my new favorite author.
Posted by The Accidental Reader at 2:19 PM