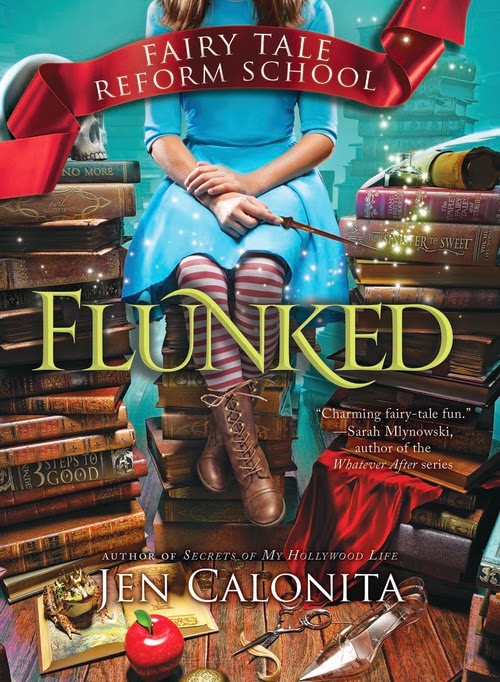 Fairy Tale Reform School: Flunked
By Jen Calonita
Sourcebooks Jabberwocky ● March 3, 2015
ISBN 9781492601562 ● Hardcover/$15.99 ● Ages 10+
Advance Praise for Fairy Tale Reform School: Flunked
“Flunked is spellbinding and wickedly clever. Gilly is smart, spunky, and a hilarious narrator!”  —Leslie Margolis, author of the Annabelle Unleashed novels and the Maggie Brooklyn mysteries
“Flunked is a fresh and funny take on the enchanted world. (And who hasn’t always wanted to know what happened to Cinderella’s stepmother?)” —Julia DeVillers, author of the Trading Faces identical twin series and Emma Emmets, Playground Matchmaker
Would you send a villain to do a hero’s job?
From the award-winning author of the Secrets of My Hollywood Life series comes a fun, sassy fairy tale series with a wicked twist.
In the land of Enchantasia, fairy tale villains and royals coexist, but for twelve-year-old Gilly, life is anything but charmed. When you have five little brothers and sisters and live in a run-down boot, you have to get creative to make ends meet. Gilly wouldn’t call herself wicked, exactly…but she is a pretty good thief (if she does say so herself). Until she gets caught.
Gilly is sentenced to three months at Fairy Tale Reform School, where all of the teachers are repentant fairy tale villains like the Big Bad Wolf, the Evil Queen, and Cinderella’s Wicked Stepmother. But when Gilly meets fellow students Jax and Kayla, she learns there’s a little more to this school than its heroic mission. There’s a battle brewing, and Gilly has to wonder: Can a villain really change?

Advance Praise for Flunked: Fairy Tale Reform School
“Charming fairy-tale fun.” –Sarah Mlynowski, author of the Whatever After series.
“Flunked is spellbinding and wickedly clever. Gilly is smart, spunky, and a hilarious narrator!” –Leslie Margolis, author of the Annabelle Unleashed and theMaggie Brooklyn mysteries.
“Flunked is a fresh and funny take on the enchanted world. (And who hasn’t always wanted to know what happened to Cinderella’s stepmother?”)”  -Julie DeVillers, author of theTrading Faces identical twin series and Emma Emmets, Playground Matchmaker.
“A reform school where all the teachers are former villains.  Kinda writes itself, right?” -Betsy Bird’s Librarian Preview

Gilly wouldn’t call herself wicked exactly…but when you have five little brothers and sisters and live in a run- down boot, you have to get creative to make ends meet. Gilly’s a pretty good thief (if she does say so herself).
Until she gets caught.
Gilly’s sentenced to three months at Fairy Tale Reform School- where all of the teachers are former (super-scary) villains like the Big Bad Wolf, the Evil Queen, and Cinderella’s Wicked Stepmother. Harsh. But when she meets fellow students Jax and Kayla, she learns there’s more to this school than its heroic mission. There’s a battle brewing and Gilly has to wonder: can a villain really change?
Amazon | B&N | BAM |!ndigo | IndieBound 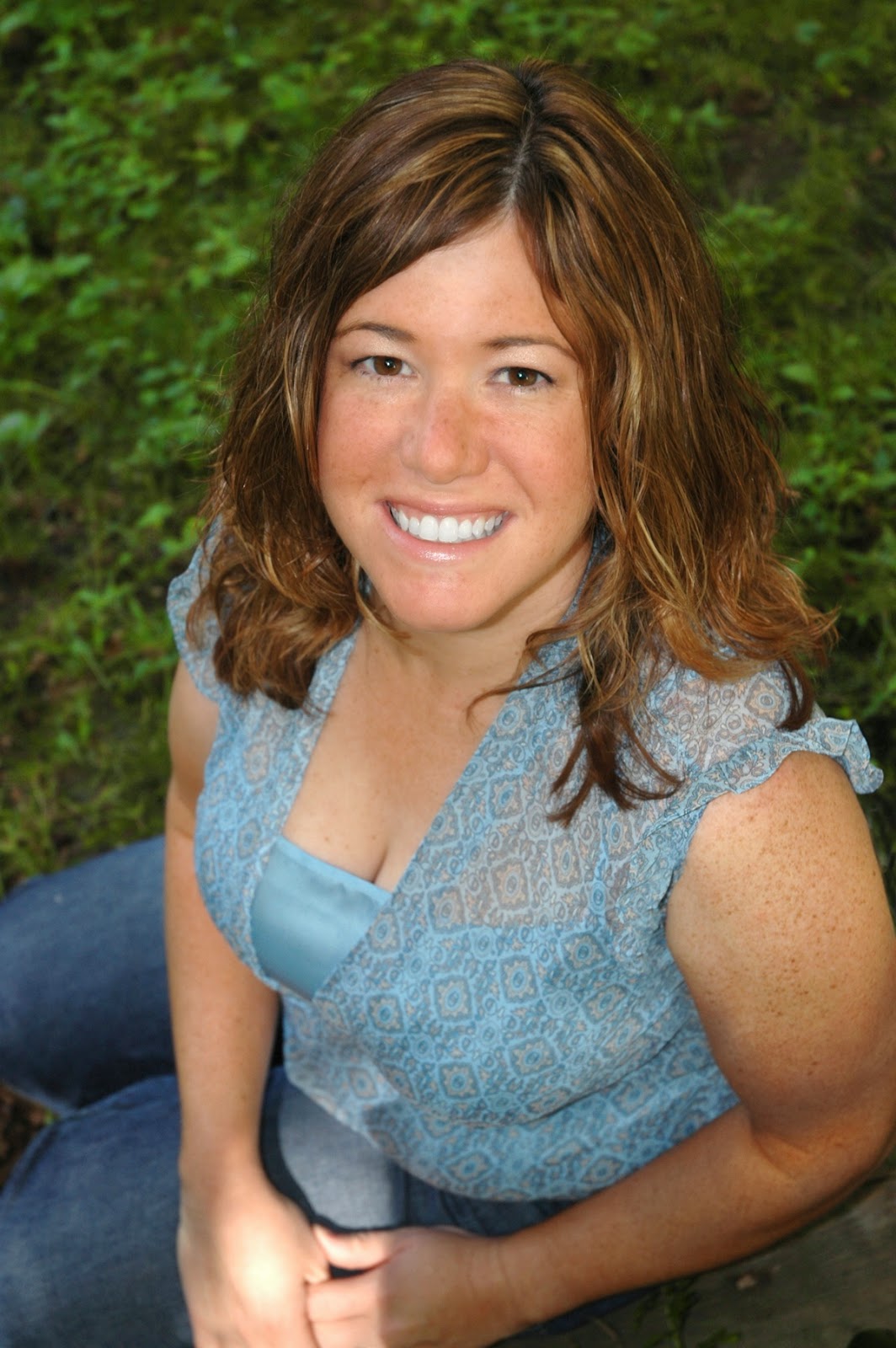 Jen Calonita is the author of the Secrets of My Hollywood Life series and other books like Sleepaway Girls and Summer State of Mind, but Fairy Tale Reform School is her first middle grade series. She rules Long Island, New York with husband Mike, princes Tyler and Dylan, and Chihuahua Captain Jack Sparrow, but the only castle she’d ever want to live in is Cinderella’s at Disney World. She’d love for you to drop her a line at jencalonitaonline.com or keep the fairy tale going at http://books.sourcebooks.com/enchantasia/
Website | Facebook | Twitter | Goodreads
Excerpt from Flunked: Fairy Tale Reform School-
There’s a boy up there, standing on the crystal chandelier! He has slightly curly blond hair and is wearing a uniform—­a navy sweater vest over a white shirt with khaki pants—­but his boots are muddy. He’s stepping on priceless crystals with cruddy boots? Is he insane?
“Jax! What are you doing up there?” Kayla whispers heatedly.
“I’m cleaning the crystal for Flora,” Jax says and rolls his eyes. “What does it look like I’m doing? I’m making
a break for it.”
Kayla applauds. “Yay! This time I know you can do it.”

I shade my eyes from the light bursting through the stained-­glass window next to the chandelier Jax is perched on. “Busting out? Why?” I ask Kayla. “I thought you said this place was cool.”
Jax laughs loudly and looks at me. I feel slightly stunned. I’ve never seen violet eyes before. “FTRS was fun for a while, but strange things have started happening and I don’t want to be here when something bad goes down.”
Strange things? What kind of strange things? Why does Kayla suddenly look pale?
“He’s exaggerating,” Kayla tells me, but she doesn’t sound convincing.
Drip. Whatever Jax is holding is leaking. Kayla and I move out of the way so we don’t get wet. “Grease,” Jax explains to me. “It lubes the window.” He swings the chandelier, and as it nears the window, he uses a fork to try to pry the window open. “A few more tries and I’ll have it.”
“Then what are you going to do, genius?” I ask. “You’re two stories up.”
Jax’s eyes gleam. “I’ve jumped from higher spots before.”
“It’s true,” Kayla says to me. “Jax once jumped from the gym to the dining hall turret. That was three stories up. We call him the Escape Artist. One time he even managed to break into Azalea and Dahlia’s rooms and borrowed their keys to the indoor pool so the whole dorm could take a midnight swim.”
“Impressive,” I tell him. “And I thought I was good at tricking obnoxious royals.”
“She stole a dragon’s tooth clip from one this morning,” Kayla fills him in.

“Nice,” Jax says. “Your first pull?”
“No, I’ve been doing it for a while,” I brag.
“Me too,” Jax says. “My father is a farmer. You can only get so far trading vegetables. I needed to kick things up a notch.”
For some reason, I don’t think any of us are going to make the transformation Headmistress Flora is looking for. “Why do you want to break out so bad?”
“I’ve got places to see, and Enchantasia isn’t one of them.” Jax swings the chandelier so hard the crystals clang together. The window latch pops open, and I watch Jax leap from the chandelier to the tiny window ledge. I’m in awe. Jax looks down at us smugly before pushing open the window. “Are you sure you two don’t want to join me?”
“There’s no time for us,” Kayla says. “Get out of here. Wait!” Her eyes widen. “You deactivated the alarm on the window, right?”
“There isn’t one,” Jax insists. “If there was, I wouldn’t be able to do this.” But when Jax lifts the window, we hear:
EEEEEE! EEEE! EEEE! Unauthorized exit! Unauthorized exit!
The shrieking sound is so intense that Kayla and I cover our ears. Within seconds, Flora is out of her office and running toward us.

Swoosh!
I feel something brush past me and I whirl around. When I look up at Jax again, a large, muscular man with a long mane of hair is hanging on to the window ledge, his furry hands pulling Jax back by his shirt. How did the man get up there without a ladder?
“Mr. Jax,” the man says in a low growl, “we really must stop meeting like this.”

A review shall follow soon, let me just tell you this one was a blast!