Girl from Above: Betrayal by Pippa Dacosta 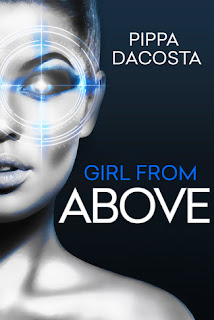 "My name is #1001, and I am not ready to die." I’d only just begun to live.When Captain Caleb Shepperd is released from prison, all he wants to do is keep his head down and earn a living smuggling illegal cargo through the nine systems. So when a synth stows away on his ship, and brings with her a crap-ton of problems, including guilt-ridden secrets he thought he’d escaped, he’d prefer to toss her out the airlock. The problem is, she’s priceless tech, and he’s fresh out of credit. #1001 is not meant to exist. Created for a single purpose, she has one simple order: to kill. But not everything is as it seems. Buried deep inside, she remembers... Remembers when she was human. And she remembers what Shepperd did to her. She’s not ready to die, but she is ready to kill. From the bestselling author of the Veil Series comes an action packed story of love, redemption, and revenge. Pippa DaCosta captures the grit and realism of her urban fantasy stories and injects it, along with some down-and-dirty passion, into the sci-fi genre. WARNING: 18+ only. Contains graphic adult content, including sex, drug use, violence, and a plethora of curse words. Not for the easily offended.

"The storm still raged. And nothing had changed, except

there was one less man in the world. "

This book is made of awesome. Really, I was a little skeptic at the beginning but after a few chapters in I knew this was going to be good.

a. Caleb - the criminal, the smuggler, the fixer. Dark past, dark soul and a darker future- I wasn't surprised what he was hiding, but damn it! I still don't know what he really feels! I mean, I think he loved someone and I think he's sorry for his deeds but he played with me so well. He is quite smart.
At first I was sure he was just a jerky jerk. Then he so he had some human decency (Once in a full moon but still), then he told us something about his past and I said- OK you know what? I don't give a fuck.
But then he let me into his dreams and memories and told me another thing about himself and I was like: "OK, wait a minute, I think I'm feeling something in my chest- it's warm and it hurts a little"
Then he said another thing and I just went like: OH MY *Kaboom*
But of course then he had to go and shatter me to little pieces almost saying, but not actually saying, he played me.
And. of course he had to finish it with a killer line that left me wondering- So was he? Wasn't he?

"I used to believe stars were wishes, that if we reached

them, our dreams would come true. But the stars will

always be out of reach, and no amount of dreaming will


B. Fran- I really don't like her, but I love to not like her, I feel just a little for her but she might get in my way somewhere in the future so we are keeping her on a low burner. Until my heart is safe and the couple I shiped is togethe I am going to be really careful about this one.
But besides this? She really is fantastic- she's talented, smart and just fun to read about (and she has depth).

C. Bran- Well, he still needs to do some growing and I wonder what's going on with him but he has so much potential!


D. Hayley- This girl, we don't see a lot of her but I can tell you this she's the stuff of heroes! she seems smart, and sad, and kind, and brave and just a little stupid but I really can't blame her for that stupidity because it really just was bad luck and not her fault.

E. #1001- So yeah, she was going to be my bigger problem. I was sure I'll have one hard time liking and relating to her, but damn, she got me. I'm the head of her fan club right now. I really can't wait to see her grow even more- I love her voice, I love her actions, I love her cold side and I love her human side. God, Girl I fucking Love You!

"He made me crazy, made me stupid, made me happy. "


All I have to say is that this book is AMAZING, yeah, it made me a fan-girl. I mean, sure it is sci-fi but you know what makes a book really good no matter the genre? The human relationships, the characters and their humanity and the human problems and the human fragility. This book has them all- I know it happens somewhere in a galaxy far far away in some far away future I dare not dream about- but the feelings, the problems at their core, the relationship and the people they are already here, they always were. Since the very beginning of the human race.

Pippa Dacosta thank you so much for providing me a digital copy through NetGalley. I really enjoyed every minute of it and it wasn't easy writing this review trying to be careful not to expose much of the plot.

So, who do I have to bribe to get my hands on the second book? really I'll do who ever and what ever it takes. LOL. Seriously though. I mean it.

Else someone will get hurt, #1001 taught me some really cool moves!


Right! I just rememeber something those action scenes were really good, just yum.

If I did buy you with that did I mention the raw and really good writing? No? so you know now. Go and read it! Now!

A digital copy was provided in echange for an honest review.

This review is also on: GoodReads
Posted by Sharon at 1:47 PM