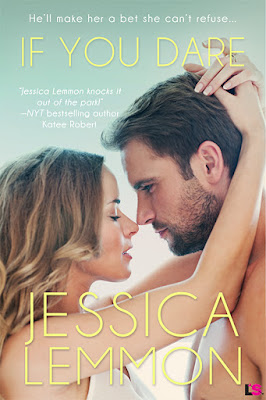 About If You Dare:

Lily McIntire is in the creepiest mansion in town. Alone. At night. Because she's  an idiot-and can't ignore a dare from her cocky and infuriatingly hot co-worker,

Marcus Black. But she'll be damned if she's going to give him the satisfaction of  winning.

Marcus has had a thing for Lily for ages, and he has no intention of losing this  bet. His plan? Scare her out of the house, and into his arms. Once there, scaring  her turns into protecting her and soon after, into seducing her.

And his plan is working...

Lily is having trouble relegating Marcus to the role of "asshat" as easily as before.

He came to her rescue, and he's actually funny. Charming. Sexy as sin on a  stick. But Lily has a strict no-love-in-the-workplace rule, and even one night of the best sex ever won't make her change her mind. So she's calling everything off...

Surviving a night in the mansion might just be the easy part. Surviving Marcus's increasingly convincing advances is going to take everything she has.

Losing is not an option...

NOTE: This title was previously published November 2013 on Flaunt as a novella but has been significantly revised and lots of yummy new scenes added to give readers a full-length category romance full of humor and sizzle.

so today we have a guest post with the lovely Jessica Lemmon, who was very nice to answer my

questions regarding her writing process and her new book. This guestpost is a part of her tour

celebrating her new book If You Dare (Note: this title was previously published November 2013 as a

novella, but now it went through lots of revisions and had new scence added!)

Now, I prestent to you - Jessica Lemmon!!!

Thank you for having me today. :)


Alpha, sexy, and with a soft spot for the heroines. In Marcus’s case in IF YOU

DARE, he’s a hot, joker of a playboy with a knee-weakening crush on his

coworker, Lily. The banter was the most fun part of writing him!


2. Do you find it hard to write heroes?


I find it awesome to write heroes! I love to dive into their heads and figure out

why they do the things they do.


3. Which do you prefer to write—heroes or heroines?


I love the hero’s POV, sometimes even more than the heroine’s. Especially

when the hero is acting like a tough guy on the outside, but is goo on the


4. What is your process when creating a character?


Often, I start with a line of dialog, or just a scene idea. With Marcus and Lily in

particular, I loved the idea of the bet, and him trying to scare her out of the

“haunted” house. He fails so epically and it’s fun to watch. I also like to make

refer back to my boards to get the “feeling” of the book just right. Sometimes I

do a playlist as well. (in the case of IF YOU DARE, I did both).