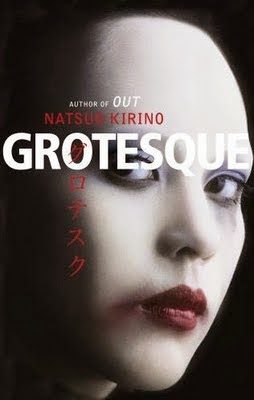 Tokyo prostitutes Yuriko and Kazue have been brutally murdered, their deaths leaving a wake of unanswered questions about who they were, who their murderer is, and how their lives came to this end. As their stories unfurl in an ingeniously layered narrative, coolly mediated by Yuriko’s older sister, we are taken back to their time in a prestigious girls’ high school—where a strict social hierarchy decided their fates — and follow them through the years as they struggle against rigid societal conventions.Shedding light on the most hidden precincts of Japanese society today,Grotesque is both a psychological investigation into the female psyche and a work of noir fiction that confirms Natsuo Kirino’s electrifying gifts.

This book confused me so much when it comes to the rating. It;s one of those books that belong in the in between and I really didn't know how to rate it. So I closed my eyes and gave it a 3.

Like all Natsuo Kirino's books you get to see the story from multiple POV'S and I guess that's a good thing but not in Grotesque. At some point the narration becomes really boring while we get to know the background of Yuriko's murderer , and my opinion is that it was unnecessary for the author to do so in this book. I would like the book a lot better if it was based on two POV's instead of 3. It would me more mysterious and more fast paced and enjoyable rather than painful. Although , I wanted to commit suicide from boredom I couldn't put the book down because it was enjoyable from a whole different aspect...modern Japan.

While the main protagonist lives her life and tells the story of her sister Yuriko we get to see a Japan so much different than the cuteness and the happiness that we know. It's a Japan dark and grey where people judge from appearance and are nosy and above all they see mixed Japanese as ''bastards'' . You get to know the ''goods'' and bad's of prostitution and why people choose this kind of life. Kirino did a really good job with the writing in this one, although the translation had a lot of mistakes and at some points you couldn't make sense, blending fiction with reality in a book that was really intriguing and in the end sad.

I didn;t enjoy this book as much I did with Out and Real World but I have to give it to her for her writing and the way she makes you see the real world people live in.

Posted by The Accidental Reader at 5:04 PM