A Wicked Pursuit by Isabella Bradford [Review by Sharon] 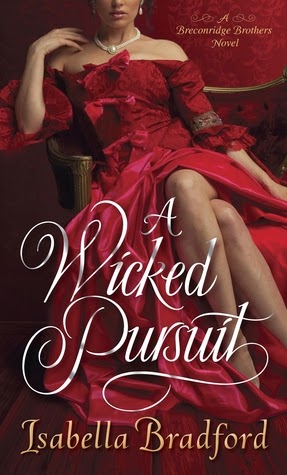 In Isabella Bradford’s enthralling new trilogy, three noble brothers—London’s most scandalous rakes—are about to do the unthinkable: settle down. Harry Fitzroy, Earl of Hargreave, is the first to meet his match and lose his heart . . . to a lady he least expected. "As the eldest son of the Duke of Breconridge, Harry Fitzroy is duty-bound to marry—and marry well. Giving up his rakish ways for the pleasures of a bride’s bed becomes a delightful prospect when Harry chooses beautiful Lady Julia Barclay, the catch of the season. But a fall from his horse puts a serious crimp in his plans. Abandoned by Julia before he can propose, the unlucky bachelor finds himself trapped in the country in the care of Julia’s younger sister. Harry has never met a woman like Lady Augusta. Utterly without artifice, Gus is clever and capable, and seems to care not a fig for society. After a taboo kiss awakens passion that takes them both by surprise, Harry realizes he’d almost given his heart to the wrong sister. While London tongues wag, he’ll use his most seductive powers of persuasion to convince the reluctant Gus that she belongs with him—as his equal, his love, his wife"

Review
This book came to me at just the right moment. You see, I felt in desperate need to read more historical romance books after finishing The Luckiest Lady in London . Historically wise, this book is very accurate and there is lots to learn from it. It is quite obvious the author, Isabella Bradford, paid great attention as well as research. The whole story of Harry's recovery was very realistic and I appreciated that, as well as the way Harry and Goose fell in love. Even if, at times, I felt like he didn't deserve her. This is a good brain candy to pass the afternoon. However, I'd like to point out that this book's fort point is also it's weakest. You see, Harry's recovery is the hardest thing that happens there, the longest one. I dare say the conflict is all about Harry's recovery and his feelings toward the fact that his leg will never be the same. Even though that is all nice and good. I'm sad to admit that, well, this book lacks in any other conflict. Yes, Goose's and Harry's relationship has some ups and downs. But each one of them is solved within a few paragraphs…5 pages top!On the one hand, one might say their relationship is so solid it's good. And it is the little challenges in life that are the real test. On the other hand, one might claim that many times you read romance book to see a relationship evovlving. Including some uncertainty. It is a good book, but it lacked in drama and scandal so very much so that I felt a little disappointed. Had it been funnier, or more witty I probably wouldn't care. But it wasn't. I would recommend it for rainy days, I think, when you want a stress free brain candy that will make you lips curve into a smile and forget you had a bad day. :DIn case you were wondering, I think the next book will have more scandal and conflict to it. I sure do hope so.A review copy was kindly provided by the publisher through NteGalley. Thank you!

this reveiw is also on: BookLikes, GoodReads
Posted by The Accidental Reader at 1:35 AM