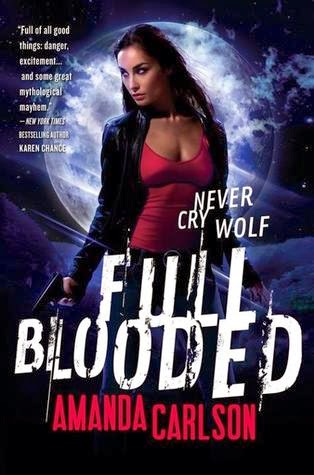 
"Born the only female in an all male race, Jessica McClain isn’t just different—she’s feared.
After living under the radar for the last twenty-six years, Jessica is thrust unexpectedly into her first change, a full ten years late. She wakes up and finds she’s in the middle of a storm. Now that she’s become the only female full-blooded werewolf in town, the supernatural world is already clamoring to take a bite out of her and her new Pack must rise up and protect her.But not everyone is on board. The werewolf Rights of Laws is missing text and the superstitious werewolves think that Jessica means an end to their race. It doesn’t help when Jessica begins to realize she’s more. She can change partway and hold her form, and speak directly to her wolf. But the biggest complication by far is that her alpha father can't control her like he can the rest of his wolves.When a mercenary who’s been hired by the vampires shows up to extract information about the newly turned werewolf only days after her change, they find themselves smack in the middle of a war and there's no choice but to run together. When it’s up to Jessica to negotiate her release against her father’s direct orders, she chooses to take an offer for help instead. In exchange, Jessica must now swear an oath she may end up repaying with her life"
Review:
Will you look at that? As some of you might say, we have nothing new here. Nothing we haven't seen before in other Urban Fantasy books. And you’d be right. However, let me assure you that in the next book you learn new things that make this book worth reading if only so you can read the rest of the series.
But this one is worth reading on it's own accord too.
First of all, this series is a great example as to how the author is writing each and every book with the thought of the total series plot. Yes, each book has a plot of its own. But they all add up to the great plotline and I love it.
Much thought was put here, and I appreciate it so much I can't even start to explain it. This book focuses mostly on character development, defining the various relationships and explaining a little about the werewolves' world and their folklore.
This is the foundation for books to come. And while weak on it's own (hence, 3 stars) I am happy to say I appreciate it much better after reading the next two books.
It has been a while since I read the books, so I'll try my best to write for each of them a well explained review.
Shall we start then?
The World Building : as I already mentioned, the focus here is on the werewolves world. There are other sects of supernatural, but as this book focus on Jessica discovering her wolfish side the book focus mainly on the furry kind. Being a shifter is something genetic, and is passed down from father to son(shifters have only male off-springs). The wolves live in packs around the globe, with each one having an Alpha. Also, most wolves are alpha born. Some wolves also have a special talent- like running or healing faster. Jessica is the daughter of an Alpha, and the only female ever born to a shifter. A prophesy claims that she will be the end of the wolves, if she turns out to be a shifter. Till now (25 years) she has shown no sign of that. But at the first chapter she makes her first change, which in turn, causes a war among the wolves as of them, obviously, fear the prophesy. However, the wolves are not the only ones that hunt Jessica down.
The Characters : Most characters that forge Jessica's inner circle are introduced here. Some of them we get to know better than others, some give us only a vague feeling of who they are and others are just passing by to say hi.
Jessica- the books are told from her POV, and she's a great character. She's loyal, smart, stubborn, and rational. She manages a good balance between being one the takes action but always thinking and learning. And yes, more often than most she tries to do the right thing. She yields quite a lot of power, and she stumbles around while she tries to figure things out. Her wolf is a character of her own.
Tyler- aka Jessica's twin brother. He's very protective and loyal, he's smart and charming, strong and very reliable. He also has some prejudice regarding other sects and how werewolves are superior which is fun to see as he keeps on having to overcome them.
Danny- this British flirtatious overly smart mouthed werewolf that provides lots of comic relief as well as smart remarks.
There are other characters as well, but I either can't or don't have much to say about them ;)
The Plot : as I said, this book while being a great debut is somewhat weak. It shows lots of potential (that is being delivered later), and it has great foundation. Amanda Carlson's world is fairly interesting. A few good points I liked:
1. Jessica has some steamy sex with someone, just because the two of them feel like it.
2. There is relationship here, family love and support. Jessica has a female friend (though, she doesn't appear much in the book)
3. There is this guy Jessica meets, and let me tell you he is a fine piece of meat. OMNOMNOM.
A review copy was kindly provided by Orbit through NetGalley. Thank you!


This review is also on: BookLikes, GoodReads
Posted by The Accidental Reader at 12:00 PM