The Pact By Karina Halle 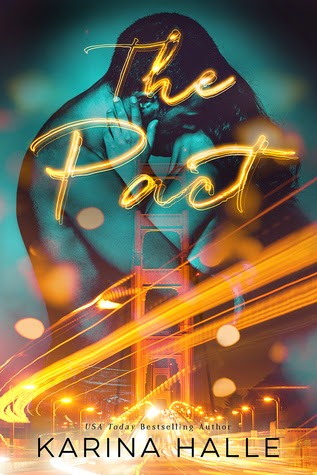 It all started with a pinky swear…Linden McGregor is tall, rugged, and gunslinger handsome; a helicopter pilot with a Scottish brogue and charm to spare. He’s also one of Stephanie Robson’s best friends and has fit into that box for as long as she’s known him.But some relationships can’t be boxed, can’t be classified, can’t be tamed.Back in their mid-twenties and tired of the competitive hit-or-miss dating scene of San Francisco, Steph and Linden made a pact to marry each other if neither one of them are in a serious relationship by the time they hit thirty.It sounds like fun and games but as the years to thirty tick past and lovers come and go out of their lives, the pact becomes larger than life.Sex is inevitable. Friendships are tested. Hearts are on the line.The pact is about to change everything.

REVIEW:
When I saw this book and decided to read it I thought I'll get some interesting romance book about two best friends (male and female) with a platonic relationship that make a promise to marry each other by the age of __, if both are not in a committed relationship. I wanted a story that will show how both make the transition from best platonic friends to lovers.

However, what I got was the story of two people that have been best friends while lusting after each other for like a decade before they finally got it done. And as much as I wanted to root for them I actually couldn’t care less.

Because the guy (I think his name started with L) was a total wuss. He needed to make a drunk pact to even start to express his want to fuck the the girl.  This was such an angsty story with her and him dating the wrong people all the while wanting each other, with both thinking of backing away from their pact. Then, finally they are doing it. And guess what? It's supposed to be awesome, right?

Well, there was a lot of hot sex and a lot of tears and screw ups and I just didn't fucking care. The only reason I even wanted them together was because I really liked the heroine, and since it was obvious she wanted the unmemorable douche guy and there was no one better coming anytime soon I hoped she would at least get what she wanted.

Two things I don't understand was her ex-boyfriend who was also his best friend really necessary in all the drama? I really didn't understand his attitude. And her nickname "Baby Blue" may I say, YUCK?

So, while I really liked Stephanie with all her flaws I couldn't care less for anything else.

However I will give kudos to the author for one important thing- she described well the feelings and insecurities when you are in a relationship that you know is leading nowhere and you are still there because taking a chance outside is too scary and 'what if you are missing something because you are just not trying hard enough or giving it a real chance?'


So you stay in a bad relationship hoping for some miracle (btw, that miracle often come in the form of divorce 5-10 years later). I've seen this too many times.
Posted by Sharon at 9:37 AM