He Drank, and Saw the Spider by Alex Bledsoe [Review by Sharon] 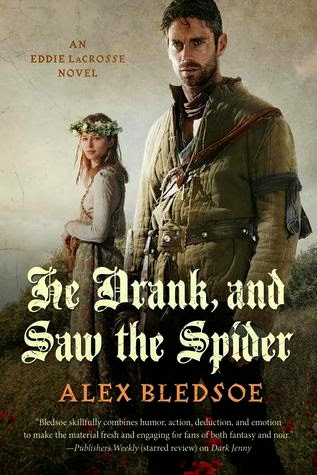 "After he fails to save a stranger from being mauled to death by a bear, a young mercenary is saddled with the baby girl the man died to protect. He leaves her with a kindly shepherd family and goes on with his violent life.
Now, sixteen years later, that young mercenary has grown up to become cynical sword jockey Eddie LaCrosse. When his vacation travels bring him back to that same part of the world, he can’t resist trying to discover what has become of the mysterious infant.He finds that the child, now a lovely young teenager named Isadora, is at the center of complicated web of intrigue involving two feuding kings, a smitten prince, a powerful sorceress, an inhuman monster, and long-buried secrets too shocking to imagine. And once again she needs his help.They say a spider in your cup will poison you, but only if you see it. Eddie, helped by his smart, resourceful girlfriend Liz, must look through the dregs of the past to find the truth about the present—and risk what might happen if he, too, sees the spider"

Review
The book starts in the past with Eddie saving a baby girl. Sixteen years later that assignment comes back into his life- with a teenaged girl, A king, some problems and magic birth.
The ending, of course, is a HEA in an Eddie kind of way- meaning no cliffhanger.
Also, the writing level and style are kept throughout the series- which is a good thing, I recall not so long ago one of my friends complaining on a deteriorating writing style in a series she used to love. Not here.
Moreover, the characters are charming and amazing as usual.
However, I still felt a problem with this book, I might even be bold for a moment and call it a weird problem.
I shall explain.
While each book in Eddie's series has its own adventure (as well as some overall development) and none of those adventures are recycled. He drank, and Saw the Spider was still less interesting than the books that preceded it. Why?
It took me some time to understand, but I now have this theory.The author had grown comfortable in the world he created . Yes, the world building is great, solid with definite rules- there are magic and technology. But there was nothing new.
There was nothing new to discover in this book. Eddie and his girlfriend are great characters they are deep, they have conflicts in them, they are likeable. Hell, you can say Eddie is a PI in a world where magic exists, he solves magic mysteries and he doesn't believe in magic!
While Eddie's character has much left to be discovered, he hasn't yet reached his full potential the world he lives in need something new in it. If this problem won't be solved, I'm afraid the next book will be great but not interesting all the same, a MEH . In such s case, IMO, Eddie's series should come to an end and I wouldn't want that.
I would LOVE to see Eddie go back to his home kingdom, I think that could be interesting. It's just that there's a need to find something new in Eddie's world, something that would challenge him.
On a more private note-there was a new aspect to Eddie's and his Girlfriend relationship. An aspect that felt forced and a little Out of Characters for them (sexual bondage and BDSM).
So, to summarize while old fans will enjoy it, perhaps it's time for something new, some change, or and ending (which will be sad as there's still so much to explore with the characters)
A review copy was provided by Tor in exchange for an honest review

This review is also on BookLikes, GoodReads
Posted by The Accidental Reader at 2:54 AM