Republic of Thieves by Scott Lynch [Review by Sharon] 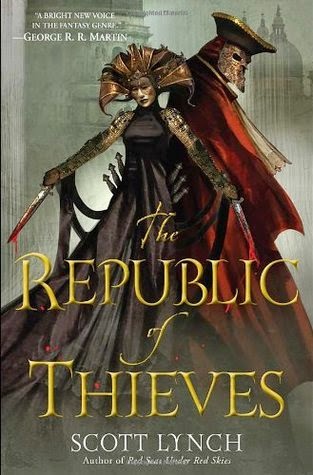 "With what should have been the greatest heist of their career gone spectacularly sour, Locke and his trusted partner, Jean, have barely escaped with their lives. Or at least Jean has. But Locke is slowly succumbing to a deadly poison that no alchemist or physiker can cure. Yet just as the end is near, a mysterious Bondsmage offers Locke an opportunity that will either save him or finish him off once and for all.
Magi political elections are imminent, and the factions are in need of a pawn. If Locke agrees to play the role, sorcery will be used to purge the venom from his body - though the process will be so excruciating he may well wish for death. Locke is opposed, but two factors cause his will to crumble: Jean's imploring - and the Bondsmage's mention of a woman from Locke's past: Sabetha. She is the love of his life, his equal in skill and wit, and now, his greatest rival. Locke was smitten with Sabetha from his first glimpse of her as a young fellow orphan and thief-in-training. But after a tumultuous courtship, Sabetha broke away. Now they will reunite in yet another clash of wills. For faced with his one and only match in both love and trickery, Locke must choose whether to fight Sabetha - or to woo her. It is a decision on which both their lives may depend."

This is a sad one.
I'm not even sure anymore how to explain it. reading the book took time...It's a long one, and I found it very uninetersting in comparison to the first two books.
I'm going to do a mash up between a brief review and an overall review to the series. Simply put, I don't remmeber much about this book anymore. It started with me not wanting to write the review because I felt disappointed. Later I simply forgot.
Today as I went through my books I saw it again and realized I needed to write a review. I needed to write something.
So I'm gonna try.
The first two books were good, they had an interestimg plot, and interesing world building, the characters were great and there were some unexpected twists and turns that were done SO WEll. I'm fond of them. Yes, I had issues- it felt as if in some way the author forgot to do his research and didn't research the small things- things that concern nature, it's law and simple physics. Truth be told, Had I not read the books with my father I probably wouldn't have known on these little holes and improbablities.
But as vain as I might sound, my lack of knowledge or my own tendency to suspend rational thought when I read a fantasy book cannot excuse the author's mistakes. Hence, the first two books got 4 stars only. The little things can sometimes be a pain in the ass. ;)
However, in the thief book I could no longer ignore those little details, moreover, there were bigger issues.
I shall explain the best I can. But remeber, it had been a while since I read it and I don't remember it that much anymore...
Throughout the book we jump between two story lines, one in the past one in the present. Eventually, they collide.
The jumps between the story lines happen so often.that the whole pace of the book is slow
So many interesting things happen, the plot moves so slowly that I was fighting to continue reading it.
While I read the first two books I felt that the author had planned each one of them from start to end before writing them. While it was one of the good things about the first and the second book, in the third book it was...well...a problem.
While adoring the author's efficiency, as many things he mentioned had a purpose, I cannot ignore the feeling that the author was so single minded in achieving his purpose & goals that he forgot to let the characters have free rein.
As a result, the characters don't have the freedom to develop.
All in all, it was Ok but I didn't like it. And in the long run it has left no impression on me. As I am not invested in the series I think, for me, it's time to bid goodbye.
I still recommend the first two books. They were greet, they were wonderful!
A review copy was kindly provided by Dell Rey in exchange for Ann honest review. Thank you!

this review is also on GoodReads, BookLikes,
Posted by The Accidental Reader at 12:57 AM