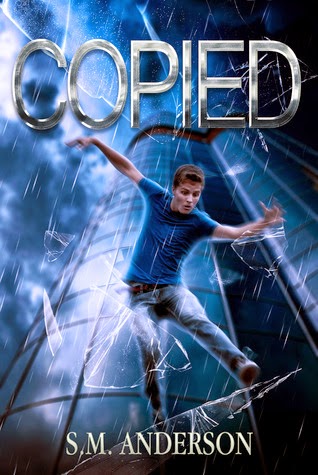 Author:  S.M. Anderson
Series: -
Number: -
Number of pages: 248
Publisher: Curiosity Quills Press
Date published: 10 December 2013
Buy on: Amazon, Amazon UK
Rating: 3 stars
"Adopted off the black market, Alexander Mitchell, has no idea his DNA is copyrighted and property of military weapons giant Texacom Defense. Nor that his DNA is being used to develop an army of clones. When the company discovers he was not properly disposed of 17 years ago, they send an assassin copy, BETA23, to terminate Xan and cover it up.
After he narrowly escapes BETA23’s first attempt, Xan teams up with Lacey, a genetically engineered genius he’s surprised to find common ground with— only they’re awkward together. Half of the time she stares at Xan like the science project he is and the other half…let’s just say Xan can’t keep his eyes off her lips.When they manage to capture a company copy by luck and sheer stupidity on Xan’s part, Lacey is determined to see the good in their prisoner to the point she believes BETA23 can be persuade to give them the intelligence they need to keep the company forever off Xan’s back. Xan’s not sure if he can trust the darker version of himself, not when it means gambling with the lives of his family and the possibility of losing Lacey."
Review
This is a book about Nature versus Nurture and many other seintifics dilemas, e.g; Does a genetically engineered person have a soul? a personality? a will of his own? What about clone? Does it have a right to live?

While not attempting to answer this questions in a definite and directive way, this book does raise them and gives us some points to think over.

This is a well-written, action packed book.

The question is, why only 3 stars?

First I'd like to clarify that 3 stars is not a bad rating, it means the book was OK and is certainly worth reading.

However, it also means the book either does not stand up as something unique on it's own or that I just didn't love it. This time it's both.

The book started out so promising I was sure it would be a 4 stars for me. It didn't disappoint, it just didn't meet my expectations.

Futhermore, while I can't say for sure how many books were written in the previous couple years in the same genre with the same blurb (clones, Nature vr. Nurture, genetic engeneering). The fact remains that all in all over the years there were many books written in that criteria. Some were better, some were worse. Some were just like this one. Which means, that in my opinion, this book failed to add something new to the genre-which was what I hoped it would do- thus, it failed to amaze me.

On a more personal ground, Xan was nice character and while the book was a little confusing at first nothing was spoon-fed to me. I appreciate it, because I really do hate it when authors mock my intelligence.

All in all, great YA light sci-fi book to read. And I do rec it.

What happened the first time I read the book

Thank you so much for Curiosity Quills Press for approving me on NetGalley for this one, and for sending me a digital copy when I missed the archive date. You are the best!

This review is also on: GoodReads, BookLikes
Posted by The Accidental Reader at 8:39 AM