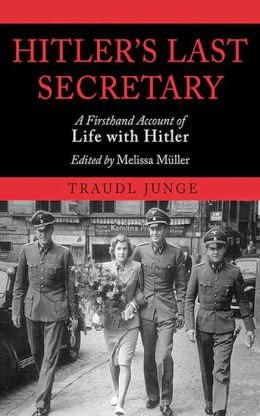 In 1942 Germany, Traudl Junge was a young woman with dreams of becoming a ballerina when she was offered the chance of a lifetime. At the age of 22, she became private secretary to Adolf Hitler, and served him for two and a half years, right up to the bitter end. Her memoir, written not long after the war but set aside until recently, offers a unique and chilling glimpse of the human face of this man known to posterity as a monster.

Review:
Being a ww2 history reader and enthusiast I came across this book in the library. The 2004 movie downfall was based on this unique memoir.
This memoir was written by Traudl Junge, Hitlers last secretary. She was in the service of Hitler from 1942 to 1945 and she experienced all kinds of things – from days of happiness and triumph to days of panic and despair to the final hours of the third reich and the final moments of Adolf Hitler and Eva Braun.
The first draft of the book was composed in 1947 – barely two years after the end of WW2. It is written in that way that the author doesn't even judge, doesn't even comment on the events she witnessed. She just tells us the story, what happened and why it happened. In my opinion for this , for writing this way, is that after all this propaganda and after all the things she witnessed she wasnt fully aware of what exactly happened. Like she could not believe it – thus was not able to fully judge it , like she did in later years with interviews on documentaries.
The most interesting part of the story is the final month in the bunker. Where everything was falling apart, how everyone left Berlin, the state Hitler was in and how this powerful leader now lay in bed weak and alone, all of his followers already abandoned him and tried to negotiate with the enemy. Even his most faithfull men. How he seemed to not know whats going on and how he stopped having military meetings in contrast two years prior that he held military meeting with his commaders and all important people that could last hours with no end. It is interesting to see that Junge and the rest of the people in the bunker actually believed Hitler when he said that there will be one more army that will beat the enemy and that Germania will rise again – till the very last minute everyone waited for this army but nothing happened.
Some people condemn this memoir by stating that Traudl made Hitler appear human and almost feeling sympathetic about him – what most of us forget is that Hitler was a human being and although he was probably one of the most cruel leaders the history ever knew he had a sensitive side. In the book Traudl says that he was a fatherly figure that everyone admired and felt safe around. He was kind and always happy to give advice – he was even overly excited when people decided to get married. Even the movie received mixed reviews when it came to the acting of Bruno Ganz as Adolf Hitler – he made him too human for some , he made the audience feel sympathetic towards him and thats what I felt. I felt sorry for him, I felt sorry for the people around him.
Hitlers last secretary for him was an amazing read, I understood a lot of things about Hitler himself and how he acted than I did from all the other books I have read about the Third Reich. I recommend that to everyone out there interested in WW2.
Posted by The Accidental Reader at 12:53 PM