Magic City: Recent Spells by Paula Guran (and many others) [Review by Sharon] 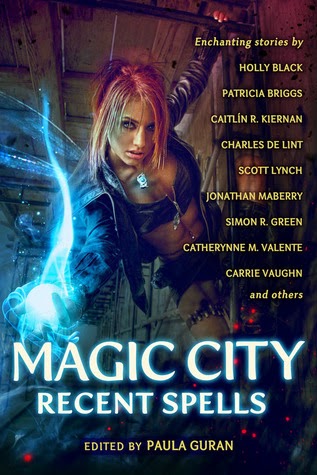 "Bright lights, big city… magic spells, witchcraft, wizardry, fairies, devilry, and more. Urban living, at least in fantasy fiction, is full of both magical wonder and dark enchantment. Street kids may have supernatural beings to protect them or have such powers themselves. Brujeria may be part of your way of life. Crimes can be caused (and solved) with occult arts and even a losing sports team’s “curse” can be lifted with wizardry. And be careful of what cab you call—it might take you on a journey beyond belief! Some of the best stories of urban enchantment from the last few years gathered in one volume full of hex appeal and arcane arts."

Before I start, I have to admit I really don't like this book. REALLY.

Which is why I'm going to border on bitchy (assuming, I'll be able to control myself).

You see that line I markered? That's a total lie, in my very honest and very direct opinion.

This is an anthology with stories about magic. I don;t know what about you (though you might agree with me if you read Harry Potter as a child and fell in love with magic), but as I grew up over the years there were quite a few things that never changed for me. One of them is Magic. If you asked me when I was little kid I'd probably tell you- Magic is awesome(!).

Never have I imagined there would come a day I would say magic could be as boring as watching one of those Baby Mozart DVDs over and over again. Then again, I just said that magic had infinte number of options- maybe I should have seen the boring option coming around the corner chasing it's exciting and lively siblings. But I didn't see that option happening, I didn't think the day would come (I never wanted it to come). This anthology proved me wrong. Magic an be boring, people can be boring (and most times I think people are never boring- they are fascinating creatures).

This anthology proved me wrong. In regards of magic- this anthology is the doomsday of magic and everything magical. [maybe I exaggerated a bit. After all I can count on one hand a few stories that get 3 or 4 stars]

Still, I'm going to side step for a moment. Have you heard of the book Practical Magic? To cut a long story short it's a book about a family of strong women that casts spells. Their magic is small, subtle and even though Practical Magic is not an action packed book and even though it's very slow paced, I'd rather read any scene from it than read almost any story form this anthology. Yes, I am well aware of the fact I actually loved Practical Magic, but even so it had scenes about everyday life- like the scent of carameled apples carried on the wind in a summer noon.

But this anthology? It's boring. At first I thought I'll write about each story. Well, no more. I really don't have the power or the time (to waste) on writing about Charlie boy and his nineteen cousins that are as ugly as him. I'm also not going to talk too much about his four somewhat not ugly cousins. Maybe, just maybe, I'll talk a little his Good Looking cousin.

SO, first of all I'd like to point out the stories written by: Elizabeth Bear, Amanda Downum, Jim Butcher and Holly Black. These stories were midldly interesting and quite well written though nit very original. In comparison to Charlie Boy and the rest of teh cousins they stand out well. But you know what? I give them 3 stars and still feel like I was VERY generous.

Once again I'm going to side step for a moment. So when I was in the 11th grade my whole grade went out to some trip (for five days). You may cal it some sort of camoing trip. They boys and the girls were separated and hardly saw each other during that week- there wasn't any interaction between us. Now, the girls were split to small group of 12, and each had her own guide. All the guides were girls, and there was the guy who was like chief guide. The chief guide was the only guy we saw and had interaction with for a whole five days. He wasn't good looking, he was below avarage. Still, he was the only guy we could see for a mile long, s naturally, most of the girl had a crush on him.

The fact is that when you surround someone with other people that are way more stupid than him, even if that someone isn't a genius suddenly he will be the smartes guy on the block which is why he will be considered as really smart.

So yeah, everything is relative. Fact is, if you're company is stupid it does not mean that you are smart. Which is why I give these stories only 3 stars and I feel it's generous. Because these stories were surronded by stories I would have given minus infinte stars to originally. So in a relative way they are better. But if I take them outside if that scale and put them in my normal everyday scale the fact remains that I wouldn't have given them 3 stars.

Another story is the one written by Scott Lynch, which is also a 3 stars one. But, unlike the others it is a solid 3 stars story. It is well written in a creative world, and the only thing that stopped me form giving it more was the same reason I gave only 2 stars to his latest book in the Locke Lamora series. Because Scott Lynch writes a story that is planned from start to finish, he makes his characters do and say what needs to be done and said in order to achieve the story he wanted, however it feels soemwhat forced. Because he does not let his characters ahve free reign. They do and say things in a way that does not fit them. Yes, I know they are his characters so he probably knows them better. But I can't ignore that sense of wrongness I felt while I read the Locke Lamora books and this Short Story.

The last story I'll talk about is Seeing Eye by Patricia Briggs. This story is a solid 4 stars for me. I'll call it the seventh cousin of Charlie Boy. It's my favourite, it's Mister Hot Guy. Seeing Eye is quite well known, and as well written. But as much as I might praise it (and I could write poems of it's beauty), it is not worth to but this book just to read this shorty. You can read it in other anthologies (as well as the new Mercy Thompson book that would come out soon and contains all the Mercy Universe short stories). Fans of Mercy Thompson would love it. Others would enjoy teh well developed characters, the conflict and the great world that is learned/explained here so effortlessly. Which leads me to the most important thing- I understand what this story is doing will all this boring bunch. You know how sometimes people hang out with the golden, well liked, popular kid hoping that in someway some of his popularity will rub off on them? Well, this is the golden boy, case in point it is puted and teh seventh story- right where you might lose you patience and would like to throw the book out the window, it is so good you'll keep reading afterwards in the hope of uncovering another jem in this aweful anthology. Personally, I think that instead of putting it with this bunch of well meaning but stupid fellows, the teacher should have just required from them the same level of quality. It might sound bad, But hiding behind your Mama's skirt has never made anyone independant.

Now, as for Charlie Boy (the first story and a great example to all the other ugly cousins) is a street wizard that protect humanity from all the things that go bump in the night. Sounds amazing, right? So many possobilities! Well, Charlie thought (for no apprent reason) it was important to tell me that he brush his teeth every night (when he wakes up), that he sees the world as it really is- with demons and other creatures (That are supposedly dangerous, but truth is Charlie would kill you of boredome before any of them will get a chance to even lay a finger on you), he tells us about Red (the working girl). But that's really as exciting as it got. Nothing happens with Red, actually nothing practically happens beside Charlie walking the streets.
And truthfully, When I walk the street it tends to be more interesting.

Some of the boring stories were about Fae- in the TinkerBell, and Shakespear style. Well, if you read Fever by Karen Marie Moning you'll probably understand how boring that is. If you have yet to read Fever, I say- Go read it now instead of wasting you time on this boring excuse of a book.

A review copy was provided by the publisher through NetGalley in exchange for an honest review.


This review is also on: LeafMarks, BookLikes, GoodReads
Posted by The Accidental Reader at 10:31 AM