Girl from Above: Escape by Pippa Dacosta 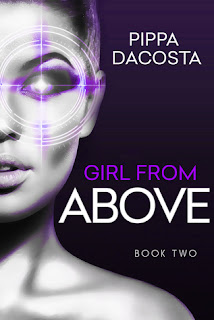 "There’s no quicker way to get yourself killed than trusting someone in the black." ~ Caleb. Caleb Shepperd knows Fran has her own motives for helping him escape prison, but he’s not about to let a little thing like past betrayal stand in the way of his next paycheck. Until he’s forced to meet with the sexy and psychotic pirate, Adelina Cande. They’ve met before. When he seduced her, cleared out her credit account, and left her for dead in the black. Caleb figures Adelina holds a grudge when she plants a bomb on his ship and demands he steal a fleet freighter for her, that is, if he ever wants to fly again. Get him drunk enough and he’ll try anything once, but this time, he has to balance his own greed, with the needs of a vengeful pirate and the scheming of his dubious second-in-command, Fran. What could possibly go wrong?In the heart of Chitec headquarters, the synth known as #1001 enlists an eager young technician to aid in her escape. But it’s not freedom she wants. It’s revenge. The memories of a life that don’t belong to her demand she finishes what she started. She believes she killed Caleb, now she's targeting Chitec CEO Chen Hung, and not even the hopeful technician can dissuade her. Synthetics don't make mistakes. She thought she knew the truth. She was wrong. ***The fast paced sexy sci-fi series continues in Girl From Above 2: Escape. Reviewers call the 1000 Revolution Series an exciting mix of Firefly, Ex_Machina, and Blade Runner. WARNING: Adult content. 18+ only.

You thought you had it all or at least some of it figured out by the end of the first book, right?  (I know at least I thought that...)
Think again.
Twists, turns, revelations, characters interactions, the stakes are higher than before and they have NO INTENTION of slowing the ascend. There is a new sweet character that I find myself liking a lot.
I love 1001, I love Caleb's complexity and I want to know more, read more.
Really, my head just went Ka-boom, exploded, gone forever.
The only thing I'd really want a hint about (as I am a romance reader) is a hint about the romance and about Caleb's feelings and heart. He is complex and unreliable. He is an ass but he is not as bad as he thinks. Just like how 1001 is not as simple as she thinks. She is human and complex and wow.
many thanks to the ever wonderful Pippa Dacosta for providing me with a review copy in exchange for an honest review
Posted by Sharon at 9:25 AM