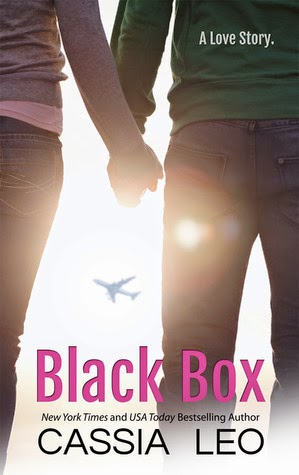 Over the course of five years, Mikki and Crush cross paths on three separate occasions. Their first encounter changes Mikki's life forever, but their second meeting leaves them both buried beneath the emotional wreckage of a violent attack. Mikki is left with more questions and grief than she can handle, while Crush is forced to forget the girl who saved his life.

Now nineteen years old, Mikki Gladstone has decided she's tired of the mind-numbing meds. She books a flight to Los Angeles to end her life far away from her loving, though often distant, family.

When Mikki and Crush cross paths for the third time in Terminal B, neither has any idea who the other person is; until they slowly piece together their history and realize that fate has more in store for them than just another love story.

Review
Black box its not your typical love story – in fact its so much different and fresh that any love story out there. Written in a masterful way the author promises heartbreak, gloom and sadness and rejoice in a whole other level.
It all starts with Mikki a girl suffering from bipolar and a past full with unhealed wounds that hunt her everywhere. She feels her past everyday, she sees them, breathes them, she changed completely because of them but she never got over them. That memory never erased no matter how many meeting she had with her phycholgist no matter how many times she tried to kill herself. They are there but under the shadow of her scary past lies a mystery, her savior.
Meet Crush a sexy, sad and rich man who tries to hide from his friend death that happened four years ago,a guy who carries a burden and the worst of guilts on his shoulders a guy who tried to find the only person that made him feel and saved him without her knowledge, a girl that he will never forget no matter what...until he finds her in the most weird place – an airport.
It all started there at the airport a journey of two people that were ''strangers'' until they realised that they know each other and they had met under the most gory and sad circumstances. Their separate tragedies entwine to reveal the utmost purpose of fate. While the days the have together they explore themselves and their limits they also become close. Mikki never had so many first in her entire life but within a few days she managed to find herself and love herself for who she is and for what she wants to be. She embraced life and saw hope in the future for the first time.
The book is written really well but what put me off was the insta love and the too many coincidnces that really made some parts of the book cliché. Other than that the writing was really good, we had a double POV which for me was a huge plus since you get the whole story with no loose ends or gaps.
Its a great read that will make your heart ache from sadness but in the end you will rejoice with utmost excitement.
Posted by The Accidental Reader at 12:26 PM