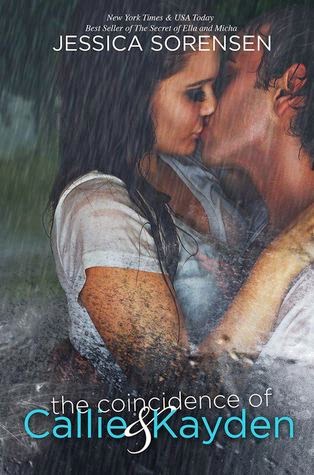 Buy on: Amazon
Add on Goodreads

For Kayden, suffering in silence was the only way to survive. If he was lucky, he could keep his head down, do as he was told, and make it through the day. But one night it seemed like his luck-and his life-might finally end... until an angel named Callie appeared just in time to rescue him.

Callie has never believed in luck. Not since her twelfth birthday when everything was taken from her. After the worst was over, she locked up her feelings and vowed never to tell anyone what happened. Now, six years later, she continues to struggle with the painful secret that threatens to consume her.

When fate lands Kayden and Callie at the same college, Kayden is determined to get to know the beautiful girl who changed his destiny. Quiet and reserved, Callie still fears letting anyone else into her world. But Kayden is certain that Callie has come back into his life for a reason. And the more he tries to be a part of her life, the more he realizes that, this time, it's Callie who needs to be saved...

Review:
I had this on my reading list for quite some time now and as always I picked it up becaise I could not find one of the books I was looking for...as always it was by chance...by chance a really well developed, great book.

As you all know by now I usually drop a book on page 30 if its not good and a lot of times I decide whether or not I will continue reading from page one. With this one I had a really strong bond, mainly with Callie, reading the prologue was all I needed to know that she would be a complex and well developed character. The author did a really good job with creating Carrie, she threw in just the right amount of sadness, melancholy and pain to give us a 18 year old wanting to leave her nightmares behind and get control of her life. Just the right amount of teen-angst in addition to the uncertainness of the newly emerged adult.

While Callie leaves for college with her best friend, she tries to do all the thing she wasnt able to do while back home, go to parties, fall in love, let someone understand you and feel you and all the things normal people do. She missed all those things because someone stole it from her.

The author managed to give us a broken from rape character, developed in that way that I felt she was real, she was an actual victim.The thoughts and the perspective of life was so different from what we experience in todays yound-adult, new adult novels these days. Although this is one of the cliché love stories it was told in that way that made it a little different. My heart felt for her so many times while she was trying to change her life with small steps one of the time with the help of  Kayden, a boy from her past, a boy she could not forget because simply he seemed as troubled.

Kayden coming from an abusive family, an abusive father and an alcoholic father, tries to leave everything behind and get as far away from his home as possible. One summer night of one of the parties his family had his dad would go over the edge as usual and abuse him, it would be bad if it wasnt for Callie, who she was passing by by accident. She saved him. After that Kayden was looking for  her everywhere until he accidentally bumped on her on campus. And here everything changes.

There is not a lot that I can say on the plot because I dont want to spoil any major scenes.

What I loved about this book is the fact that the author took her time to develop the relationship between those two and I felt like I had all the time in the world to read this amazing book. The book is mostly about facing your fears, coming to terms with our inner demons and taking control of the life that was stolen from you. Do not expect insta-love and romance from page one because thats not gonna happen and I loved it so so much.

One of the major things that had me so pissed about the plot was the freaking CLIFFHANGER!!!!! Like SERIOUSLY? Thank god I dont have to wait for book two.

Other than that I think the Coincidence of Callie and Kayden is an amazing read, probably perfect, the author made me relate with the characters and change my ideas on some subjects.

I really hope you will enjoy.
Posted by The Accidental Reader at 4:33 PM