Tears of Tess by Pepper Winters (book review by Efterpi) 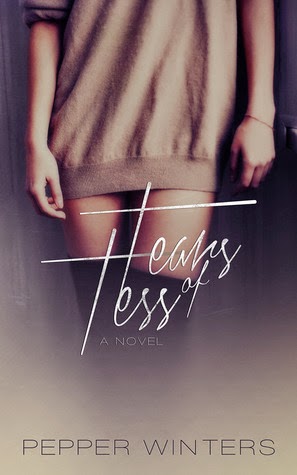 A New Adult Dark Contemporary Romance, not suitable for people sensitive to grief, slavery, and nonconsensual sex. A story about finding love in the strangest of places, a will of iron that grows from necessity, and forgiveness that may not be enough.

“My life was complete. Happy, content, everything neat and perfect.
Then it all changed.
I was sold.”

Tess Snow has everything she ever wanted: one more semester before a career in property development, a loving boyfriend, and a future dazzling bright with possibility.
For their two year anniversary, Brax surprises Tess with a romantic trip to Mexico. Sandy beaches, delicious cocktails, and soul-connecting sex set the mood for a wonderful holiday. With a full heart, and looking forward to a passion filled week, Tess is on top of the world.
But lusty paradise is shattered.
Kidnapped. Drugged. Stolen. Tess is forced into a world full of darkness and terror.
Captive and alone with no savior, no lover, no faith, no future, Tess evolves from terrified girl to fierce fighter. But no matter her strength, it can’t save her from the horror of being sold.
Can Brax find Tess before she’s broken and ruined, or will Tess’s new owner change her life forever?

Review:
Tears of Tess ARC was kindly provided by Black Firefly books
I only have to make one statement on this particular book.
If I was Christian Grey I would probably weep in front of Q. A lot of people related this book to Fifty Shades of Grey and to say the least: They are so so wrong. Tears of Tess is a much darker, much agonizing, much much more mature and well developed book than Fifty Shades. Q himself is a book on its own. Tess herself is a bible on her own. The Plot itself is like nothing I ever read before.

It all starts with Tess...a 22 year old university student getting ready for a vacation to unknown with her boyfriend Brax. From page one I wanted to slap her so hard so she could wake up (that changed later). We see a girl in a relationship that she is not completely happy in, she wants to try new things and then she is scared the reaction of her possessive, yet protective and sweet boyfriend. I read her fears and her thoughts while she was trying to find a way to change Brax.

The vacation doesnt go the way they planned, not because of what you may think but because Tess failed to make Brax see what she wanted the most. More action in the bedroom.
While in Mexico, Tess is being kidnapped by human traffickers, her worst nightmares simply could not be compared with what she went through. And this is where the book actually started for me. This is when Tess is being transformed to a strong human being trying to survive under the worst possible conditions, while she is beaten and degraded from animals. I loved the fact that the author did a good job describing the feelings of Tess while she was being abused,the thoughts, the ways she planned to take revenge and get the hell out of there.
Suddenly from an unknown place she found herself in France,being mocked by a rich,twisted, dark Man. A man she loathed at first sight, Q.

Meet Q Mercer ,the most broken, dark, twisted, beautiful character I ever read in a book. The most troubled creature that no one could save or so he thinks. He is a man that doesnt know how to control his feelings and urges and he is even scared of how far he can go with himself. But as the book moves on we learn that beneath every monster there is a broken man fighting with his demons, a man who cant show any emotions because behind all this armor he is too scared and vulnerable.

Tess is being troubled by the need to be touched by Q to be devoured into this twisted world of his. She wanted whips and straps and handcuffs and now she has these and an even more frightening future awaits her. She finds herself attracted to Q and again we see the genius of the author as she made Tess go back and forth in her mind, torn between her old life and the new, between Brax and Q, we see her making the comparisons, troubled and confused between right and wrong until in the end she chooses what she thinks is right.

This is a brutal love story, dont expect romance, poems or roses this is the world of a twisted man with only dark thoughts and actions to mark his life and the life of Tess. I cant say anything more in this review without risking spoiling important things to you.

Tears of Tess has everything in it, from stupid romance, to kidnapping, to violence, rape, human trafficking ,abuse and humiliation to hardcore BDSM. It gives a sense of dark masochism and how it feels to be a submissive. How deep down all of us hide a room with our darkest fantasies, fantasies that even scare us, fantasies that can be released as easily as we thought of them and either get us drowned in blood or drowned in pleasure. A book about self discovery, self appreciation, self understanding and the power of taking control of who you are and coming to terms with.

I simply cant wait for book two.
Posted by The Accidental Reader at 3:22 PM