With the Band by L.A. Witt (book review by Efterpi) 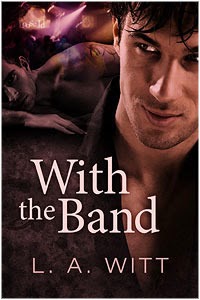 Hard rock band Schadenfreude is finally on the verge of the success that’s eluded them for the last several years. With Aaron McClure as their new lead singer, nothing’s going to stop them…except maybe a steamy, secret relationship between Aaron and bassist Bastian Koehler. Aaron knows all too well what can happen when band members get involved with each other. After all, his last band was a casualty of his last relationship, and Schadenfreude forbids band members from dating for that very reason. But Bastian is too hot to resist, and besides, it’s just sex, so what’s the harm?

Bastian has just gotten out of a long relationship with his volatile ex-fiancée when Aaron catches his eye. The sexy singer is irresistible, and in spite of the potential for strife within the band if this comes out, Bastian can’t help himself.

Their passion in the bedroom is rivaled only by their ambition as musicians, though, and pretty soon, it's going to tear them, and Schadenfreude apart, if they can't get back to playing with the band.

Review:
To be clear before we go on with this review ,I have never ever in my life so far read one single book of gay romance or M/M or whoever you guys call it..this is my first and from what I have heard from other bloggers its a really good read in comparison to other M/M novels out there..and it was...it really was.

Once the book start we get a little background on Aaron, the main character of this book. He is on the way to Seattle, returning from Los Angeles after his band broke up because of him and his boyfriend. Pure drama in my opinion.

Once Aaron meets up with his brother in order to join their band since they fired their singer, he comes face to face with Bastian...German btw. The attraction is instant but the problem is that Bastian is straight so that leaves Aaron alone in the shower masturbating over Bastian. To keep things short Bastian (bisexual) makes the first move and we find both of those rockers in a sequence of pure lust and cheek-blushing sex scenes. So hot I could feel the steam coming off my Nook's screen.
The writer seemed to be doing a great job with the descriptive part of the book but seemed to be doing exactly the opposite when it came to actual dialogues and dropping a little of background info on both of the main characters.

The good thing with the first page though was the writing, it had me hooked on the book until the end. And after page three or four things went south...really south in a bad way. What struck me the most was the repetition of words and phrases in one single page that made me want to scream from frustation and annoyance. This is Writing 101 there Witt, seriously wasnt that the first thing you learned?

Conversations seemed to circling around the same context of ''How are we going to come forward to our families and friends?'' ,''What will they say?'' etc over and over again it made it tiring and really annoying at times. All the sex scenes started with ''We should stop..'' and ended in pure sex.
Bastian and Aaron didnt seem to be talking about anything else but the situations mentioned above and when they did they cut it short because of more SEX. Seriously?

I also hated how the band responded to the revelation of their relationship and how this thing kept dranging on and on and on. We live in the 21st century for fucks sake, I mean how hard is it to stomach the fact that two people are gay and in a relationship fucking their brains out in secrecy every night?

As for the characters dont expect a lot of depth and a lot of intuition they are just plain. I couldnt even bond with Aaron on Bastian.

The ending was really disappointing because for an unexplained reason it was rushed and cut short.

Three stars it is for the sex scenes and how hot they were.
Posted by The Accidental Reader at 11:37 AM