Addicted for Now by Krista and Becca Ritchie [Review by Sharon] 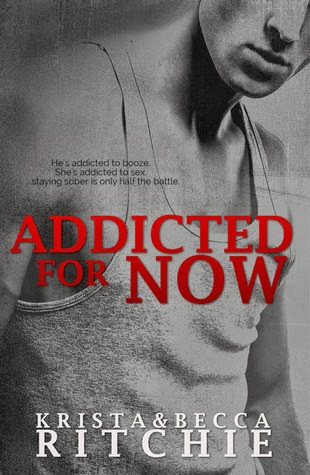 "He's addicted to booze. She's addicted to sex...staying sober is only half the battle.
No. More. Sex. Those are the three words Lily Calloway fears the most. But Loren Hale is determined to be with Lily without enabling her dangerous compulsions. With their new living situation—sleeping in the same bed, for real, together—Lily has new battles. Like not jumping Lo’s bones every night. Not being consumed by sex and his body.Loren plans to stay sober, to right all of his wrongs. So when someone threatens to expose Lily’s secret to her family and the public, he promises that he’ll do anything to protect her. But with old enemies surfacing, Lo has more at stake than his sobriety.They will torment Lily until Lo breaks. And his worst fear isn’t relapsing. He hears the end. He sees it. The one thing that could change everything. Just three words. No. More. Us. New Adult Romance recommended for readers 18+ for mature content" 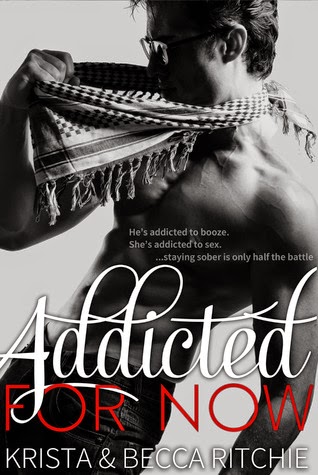 For this review and more visit my blog The Accidental Reader
Here is the thing about Ktista and Becca Ritchie, their first book tore me apart. The second left me bleeding and the third, the third healed me while leaving a huge ugly scar. And I'm thankful for all of it. Actually, I can't wait for the next books in the series.
I am not a masochist. Not even a little. Or at least, I thought I'm not until I met the Ritchie sisters. Seeing Lo & Lily's journey broke my heart. It was a sad, beautiful, hopeful journey.
Addicted for Now ends with a satisfying ending, and still leaves much to be desired. I am not ready to say goodbye just yet, in a way, I wonder if I ever will. But that's what rereads are for.
I'll try to make sense. But I promise nothing.
I would start with the writing, it's good. It's very good. Full of harsh truths and wisdom. The first and second books are solely from Lily's POV. But we get Lo's POV as well in third book. And both voices (Lo's and Lily's) are solid so much so I am sure I could tell them apart. There is more, please don't hate me. But not many female writers can write a good guy's POV. Same to be said of male writers and female POV. But Lo's voice is good and realistic.
The guys in the addicted books are just as real as the girls- in words, behavior, feelings. Everything.
As for the characters- Rose is my favorite. And Connor is the type of alpha male I really love and respect, maybe because he's not really alpha, but more of a gamma. So you can imagine how excited I am for their book to be released soon (24th January 2014).
That aside you need to understand something about the characters- they are complex, human. They are not very likeable. Sometimes I wanted to hit them hard, other times I was tempted to yell in frustration because they annoyed the hell out of me. They have faults, many many faults.
And yet, I love them. I feel like I met new-old friends. Each one stand on their own.
Lily is supportive, perspective, slow, weak, dependant, true to herself, slowly she becomes stronger. She finds her strengh but she stays fragile. She is determined.
Lo is an A-hole, he's selfish, protective, strong willed, understanding, twisted anf broken.
Ryke is brutally honest, he's a busy body that shoves his nose in other people's business. He's caring and knows no limits.
Daisy is full of fire, she takes dangerous risks all the time, she's mature for her age. She is honest and smart, she's cool and tries to please everyone.
Connor is super smart, he's vain and hardly lets anyone in. He's an manipulator and almost nothing is beneath him in order to get to the top. Still, he has principles. He notice everything, he collects information and use it for his own benefit. He's a manipulator. But also a true friend, and a caring boyfriend.
Rose is smart, cold, composed, she can hurt people with her words very easily, she's full of pride, competitive, she loves without limits and support those she care for. She's fragile, insecure and self confidant. She's a fighter.
And that's exactly the thing. We get to know the supporting characters just as well as the main ones. Each relationship is complex. Nothing is easy. There is no black and white- just like the covers of the books, it's crystal clear but it's also very grey. Each relationship is different and fucked up in her own way, while still being oh so right.
I can't talk about the plot- because each book is long and lots happen. If in the first book we see how Lily and Lo become a couple and slowly, painfully spiral to rock bottom, then the second is about them being apart. Starting recovery. And learning to relay on others. The third is about relaying on each other, finding balance and intimacy, fighting their addictions together. Finding support in friends, family, each other and themselves. It's about screwing up, it's about falling and getting up. Keep trying. It's about finding their way, facing the demons, learning limits, facing the truths, accepting them and move on. It's about learning from mistakes, learning to forgive. Even to the things you think are unforgivable. It's about forgiving yourself.
Seeing Lo and Lily supporting each other when, even with tough love when needed was heartwarming. I love seeing the two of them growing up.
The truth is, after this book you can stop reading the series. It's satisfying. Personally, I don't want to. I want to see all the journey. I want each and every book to come out already so I can read them. Yet, I don't because then I'll have to say goodbye. I can only hope that once this series is over, Krista and Becca Ritchie will write something new. Just as good if not better.

This review is also on: GoodReads, BookLikes
Posted by Sharon at 9:58 AM