Ricochet by Krista and Becca Ritchie [Review by Sharon] "As a sex addict, Lily Calloway must do the impossible. Stay celibate for 90 days.
Cravings and fantasies become her new routine, but while Loren Hale recovers from his alcohol addiction, Lily wonders if he’ll realize what a monster she really is. After all, her sexual compulsions begin to rule her life the longer she stays faithful to him. Progress. That’s what Lily’s striving for. But by trying to become closer to her family—people who aren’t aware of her addiction—she creates larger obstacles. When she spends time with her youngest sister, she learns more about her than she ever imagined and senses an unsettling connection between Daisy and Ryke Meadows. With Lily and Lo’s dysfunctional relationship teetering and unbalanced, they will need to find a way to reconnect from miles apart. But the inability to “touch” proves to be one of the hardest tests on their road to recovery. Some love brushes the surface. Some love is deeper than skin. Lily and Lo have three months to discover just how deep their love really goes.------Includes the first chapter to the sequel Addicted for Now.Companion to the Sequel: A full-length New Adult Romance that continues where Addicted to You left off. As a companion novel, it bridges the gap between the first and second book. It is highly recommended to be read beforeAddicted for Now." 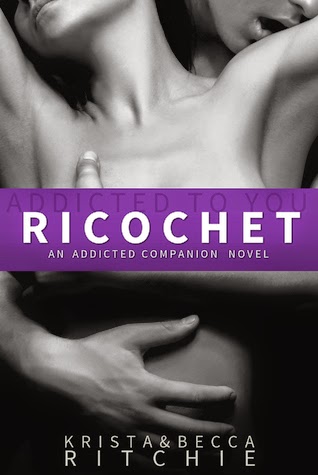 Ricochet is a weird book.
Mainly because the love interest is missing. After the events in Addicted to You, Lo is in rehab and lily started therapy. For the first time they can remember, they are separated for 90 days.
More over, they hardly talk to each other because of Lo's rehab program.
Lily copes by crying. She's got Rose's unconditional support and she tries to be a better sister to Daisy. Also, she learns some harsh truths about herself and her addiction.
While being physically missing most of the book, Lo's presence is stronger than ever because of his unique relationship with Lily.
They are so Co-dependent on each over, their love so consuming it is hard to know where one begin and the other ends.
We also get a glimpse to Rose's and Connor's unique relationship, to Daisy's fire and to Ryke's soft side.
We also get to know better Samantha and Greg Calloway. As well as Jonathan Hale. They are far from being perfect parents, or even dotting one s. But they still all care, they love, even if that love comes through in a wrong way.
What hurt me was seeing how Rose and Lily were both forced to see the faults in their parents parenting. They understood the consequences, and now were left to fend for themselves and deal on their own.
"the damage is done. I think we ate old enough to feel the scars of our upbringing. Now we just have to find a way to heal.
This series describe it so well- being part of a family, with the complexity of each and every relationship within. Trying to find your own place, to know your limits and overcome your fears. To understand your parents are far from perfect, that sometimes they won't hear you while you tell them what you need. and still love them. to know that despite their flaws your family will stand by your side when you need them most, just like they do when everything is OK and you wish to be left alone. To know you are loved
I'm going to sound like a broken record, but the Ritchie sisters have created a wonderful set of characters. So great they feel real.
P.S. Krista and Becca Ritchie shows different ways of therapy regarding sex addiction. They stress how hard thise addiction is. Because unlike alcohol, a sex addict need to learn to live with his addiction and control it. It is a constant battle. The Ritchie sisters treat the addiction problems seriously throughout the series.

This review is also on: GoodReads, BookLikes
Posted by Sharon at 9:58 AM