Through the Smoke by Brenda Novak

Buy on: The Book Depository, Amazon 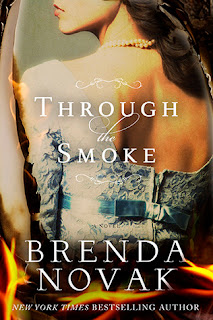 "A shocking betrayal…
Riches. Power. An ancient heritage of pride. The Earl of Druridge wanted only for an heir. So when he learned that his wife was carrying another man’s child, he was filled with a thirst for vengeance.But he wasn’t the one who caused Katherine’s death. Or was he? To his horror, he remembers nothing of that dreadful night, when their last confrontation ended in scorching flame and cold blood.A forbidden love…Rachel McTavish, the beautiful daughter of a coal miner, knows something about the fire that took Lady Katherine’s life. In secret, the strong-willed girl strikes a bargain with the desperate earl: he must send his physician to help her dying mother or he may go to the devil—and the scaffold. He agrees, but she is still unsure that her revelation will be enough to save him when so many wish him dead.Passionately drawn to the nobleman, despite all the doubt and mystery that shrouds him, Rachel wonders if he can really be a murderer. Or if he is the only man who will ever own her heart…"

Before I start this review I need you to understand something, while reading this book a few things happened to me:
I walked on the street with my nose stuck to me phone (where I read the book), I lost sleep, I got on the right bus but missed the right station to get down on and held to walk all the way back, I was late for class, I missed some classes and I hardly listened in the ones I was in.
In short, I was so immersed by the book I forgot about the people around me and the things I needed to do, my full attention was on the book (thus all those mistakes I made).
It has been a long time since I was this caught up in the book- up until now I was sure it was my great discipline and self-control, I was fooling myself to think so.
Brenda Novak says in the introduction how she wrote this book inspired by the gothic feeling of Jane Eyre and Wuthering Heights. Only time will tell if she accomplished her goal. But your humble servant here thinks she did but she also managed to create something entirely her own!
This historical romance is written so very beautifully, and sometimes it had maintained a gothic feeling, but even when it didn't it was still chilling heart wrenching or heartwarming and completely terrifying, especially the last few chapters that had me so nervous and afraid!
I have to give you a fair warning- unlike Jane Eyre, Wuthering Heights or any historical romance that was written at that time, this book, influenced by these day and age, had sex in it. At first I found it somewhat weird, since I thought that if the author aimed at a certain style she would not write such thing. But she did and I'm glad she did, because despite my love for Jane Eyre I found it lacking in sexual tension and I didn’t know that it bothered me until I read the sex scenes in this book, that are wonderfully and tenderly written.
Both main characters- Rachel and Truman (the earl), might not be likeable at first (though I loved them in first read). They are full of pride, and property and passion. Sometimes they can be found a bit cruel or naïve, full of prejudice. They can appear somewhat cold- but they stay true to themselves and their ideals through the whole story, not wavering even once.
Rachel with her naiveté, pride, stubbornness and honesty- showed her strong will enduring all the hardships in the village. I could not belief the lengths to which she went to keep her brother safe and to provide to him, her actions were truly admirable.
And Truman, with his determination to find his wife's killer, his will to protect and help Rachel, his love for her and the way he noticed every little change in her.  He was truly a noble man.
The mystery is not that much of a mystery though some of the reasons behind things were surprising, and even when I suspected who the "bad guy" was, Mrs. Novak managed to have me wishing it wouldn't be him.
This book avoids all the tropes historical romance book are so well known of. The things I usually find annoying in these books- like a lousy excuse for a lady/lord- you won't find here. Both characters are smart and act accordingly. And all the things there is to love about historical romance- like the time and the love in the etiquette- are all presents here. Oh, the time, Mrs. Novak did a wonderful job describing the work in the mines, the poverty in contrast of the high social standing of the earl and all his money. The village life just sprang to life out of the book- with the brothel and how many didn't know how to read, the rumors and the fact the each and every character was more than the sum of her actions and what she seemed to be. Mrs. Tate and Mr. Linley were wonderful side characters and very loyal it was touching. And Geordie (Rachel's brother) was such a sweet kid.
I enjoyed every minute of reading this book, even when I thought it might break my heart and when I was so afraid, so very afraid of what was to come.
A copy was kindly provided by the publisher through Netgalley in exchange for an honest review. Thank you!

*Original pre-review*
*Looking around in a haze, damn, I missed my bus station! oh well, at least I finished the book*

Review to follow shortly, but trust me, you want to read this book.


This review is also posted on:BookLikes, GoodReads, The Book Depository, Amazon
Posted by Sharon at 9:59 AM