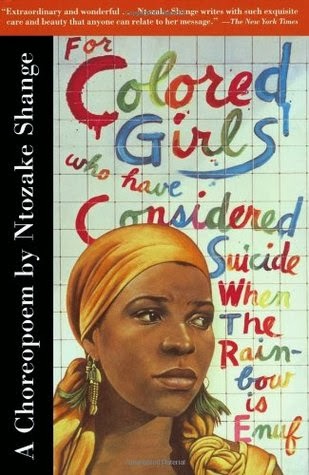 Review:
When I watched the movie For Colored Girls who Have Considered Suicide When The Rainbow is Enuff I loved the way the plot flew and the poems...oh the poems were amazing. Two years later I picked the book expecting to find poems in it but what I found was a play. This particular book is not available in Greece so I read it last month in the USA.
I am not really good with reading plays and sceenplays, a reason I never really liked reading Shakespeare, but what I liked was the words. Written freely and with misspelled words and other errors I would consider it a waste of time, but no...the book is meant to be performed and not read, its meant to be seen and not read but above all this play has a story to tell, a very painful one.
''Reading'' about five different girls with the colors of rainbow I saw the difficulties of life, the pain of love and the pain of loss, the crash of hope and the ray of hope through the tunnel in an era of hatred and racism towards black women. This book is art, while reading you can actually visualize and you can hear the songs and see the dances but above all the author asks you to FEEL.
I loved every word of this book and although I had to re-read a few parts in order to comprehend through the slung and errors that did not stop me from finishing this play.
Posted by The Accidental Reader at 5:52 PM