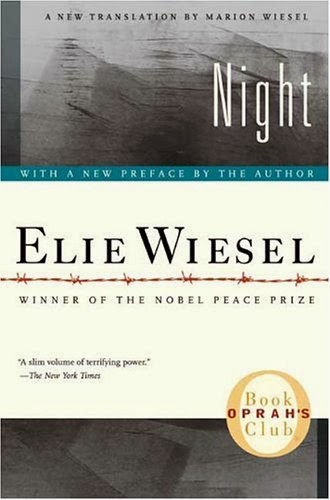 A terrifying account of the Nazi death camp horror that turns a young Jewish boy into an agonized witness to the death of his family...the death of his innocence...and the death of his God. Penetrating and powerful, as personal as The Diary Of Anne Frank, Night awakens the shocking memory of evil at its absolute and carries with it the unforgettable message that this horror must never be allowed to happen again.

While doing an experiment on reading books of WWII Death Camp survivor's accounts and memoirs I came across this little book and to be honest, this is the most memorable in comparison to the rest.
Like every autobiographical book, it starts with a little background on the authors life at the time and fast enough it progresses to the main events of the book - at this point the story turns into Nightmare.  Young Ellie was taken to Auschwitz - Birkenau in train vagons that were for animals - he and his family were treated like animals. Once in the death camp he is being separeted from his family and stays with his father and thats because an inmate warned them by telling them to lie about their ages.
From that point on we see the everyday life in Auschwitz - the nightmares those people had to go through, the starvation and the treatment they were receiving.The most important of all in this book is how a person changes - how war can change a human being from good to bad, from ethical to unethical.
At some point in the book we actually read how Ellie wished his father was dead so he wouldn't bear his burden, how he was disgusted at himself a second later for thinking of it and how he realised that he was changed so much within those few months he was in the camp, but anyone would think that way, especially when you try to survive, when life becomes a struggle about your life and when you are willing to do anything to survive, sacrifice everything just to get alive from this nightmare.I felt so sad after reading this paragraph, so guilty for a reason I cannot comprehend.
The reason I gave this book 4 stars is because of the way the book is written, although I know that is is an abridged version of the book in comparison to the original one which is only available in Yiddish (the full version). I think the publisher went too far with cutting out shocking scenes from the book that it severed a lot the content and especially for those who wanted to read more and wanted more insight of Auschwitz.
It;s a great account of the Holocaust that everyone should read.
Posted by The Accidental Reader at 5:41 PM