The Wedding by Nicholas Sparks (book review by Efterpi) 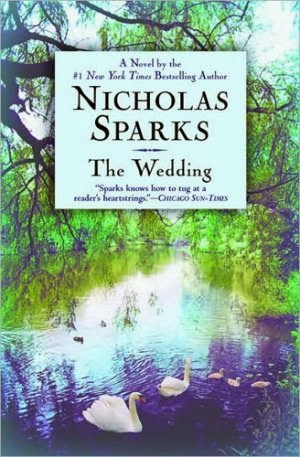 After thirty years of marriage, Wilson Lewis, son-in-law of Allie and Noah Calhoun (of The Notebook), is forced to admit that the romance has gone out of his marriage. Desperate to win back his wife, Jane's, heart, he must figure out how to make her fall in love with him... again. Despite the shining example of Allie and Noah's marriage, Wilson is himself a man unable to easily express his emotions. A successful estate attorney, he has provided well for his family, but now, with his daughter's upcoming wedding, he is forced to face the fact that he and Jane have grown apart and he wonders if she even loves him anymore. Wilson is sure of one thing--his love for his wife has only deepened and intensified over the years. Now, with the memories of his in-laws' magnificent fifty-year love affair as his guide, Wilson struggles to find his way back into the heart of the woman he adores.

Review:
This book is supposed to be the follow up of the smashing bestselling book The Notebook. To me, not even close. To me this book was a huge let down and a huge failure.Okay, I have to say that I was warned by the reviews of other readers but i did not expect it to be so bad.
Let's start with Wilson the simple husband who thinks he is wrong because his wife grew up with the idea of the ''ideal romance'' in her head and expects him to be the same way her parents Noah and Allie (The Notebook) were...well let me spell it out for you sugar : Not everyones the same way.
I felt like the book was dragging on and on and on with no end. I did not get why we had to read about Wilson and his wife and the wedding of their daughter and the preparation of the wedding...the strokes and heart attacks Noah had and all that s***. The ending was not clear enough for me to understand that yeah, you know what?, every couple goes through a crisis in his life and the point in everything is to understand and try your best everyday. I would never understand that if i never read other books like this..but better.
The whole book is over the top with a main character who tries to please his wife as best as he can and in the end he fails because, simply, his wife is blind and stupid. Anyways, there are people out there that will probably will like this without purpose book but simply its not for me.
So, if you read the Notebook and want something similar to read dont even think of this book. Its exactly the opposite of the love story of Noah and Allie. Try something else like P.S. I Love You or Twenty Boy Summer or ONE DAY.
Posted by The Accidental Reader at 7:06 PM