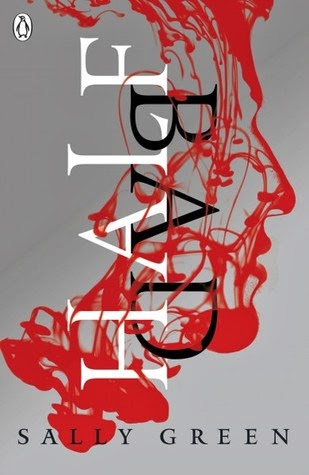 "Half Bad by Sally Green is a breathtaking debut novel about one boy's struggle for survival in a hidden society of witches.
You can't read, can't write, but you heal fast, even for a witch.You get sick if you stay indoors after dark.You hate White Witches but love Annalise, who is one.You've been kept in a cage since you were fourteen.All you've got to do is escape and find Mercury, the Black Witch who eats boys. And do that before your seventeenth birthday.Easy"

Review:
I found that the title is really quite befitting the name. Because this book is half bad. But more on that in a minute
Some of you would do the comparison to Harry Potter. Since they both deal with witches in England I guess that comparison is unavoidable. Yet, whatever issues I might have with the book (and I have), I think such comparison don't do this book justice.
Fans of Harry Potter, don't hate me.
Half Bad has some of the elements that were so lacking for me in HP.
You see, Harry Potter talked about the fight between good and evil, and they both played their roles until the very end. It was quite simple, really. It lacked in conflict. Furthermore, Harry never got dirty he remained the golden child, the pure soul until the very end.
In Half Bad good is not that good and Evil has a soft side too. It is not your element or your lineage that determine it. It is who you are inside. You can be the son of a criminal and mother Theresa. It does not matter. What matters, in the end, is who you are inside.
Nathan's story is not an easy one to read. It is a dark one from start to end, and I'm really not sure if even one drop of hope really do exist there. Nathan is branded bad from birth, his surrounding ridicule him. Yes, some support him. But they are so few, and even though their support is better than nothing. It is still not very helping. I can't fathom the pain this child had gone through (and probably will continue to).
The world is fairly interesting, there is an new concept on witches' lore.
Nathan is an interesting narrator. As many mentioned he is sarcastic. Though school wise he is regarded as dumb the child has other skills- like surviving in nature. He is also quite perceptive.
However, I DNFed the book at about 40%. I did skim through it to the end. But 40% was as far as I could endure. And even now I regret that fact.
I will start with what bothered me. Nathan's voice- he is a boy, but sometimes I really felt that it was a woman who wrote the book. He was a bit to weepy for a boy [perhaps that's not the right way to explain it, but in lack of other ways to explain it'll have to do].
Secondly, I'm not sure at what time that story takes place. There are cellphones…but I felt very confused about the time as the witches' world felt stuck in the ancient times.
Thirdly, the love interest. I can understand what Nathan would find in Annalise. But really the girl felt quiet and dull to me. I know, she's young and she's just as much a victim as Nathan is. And yet, she felt dull. Sometimes I wondered what she's doing there.
Last, but not least- be careful what you wish for
I'm sure you heard the saying. Well, while I read HP I kept thinking I wanted a darker story. I got it here, and now I'm sad to say it was too dark for me with the tortures…it was so dark that at some point I simply didn't want to continue reading it. Before you read the book, pay attention to that. It is not a happy story, or a simple one. And I appreciate it a lot.
The more I think about it the more I regret not being able to finish it. And I certainly will try again when I'm in a more befitting set of mind. Maybe, once I'll do that I'd be able to appreciate it better and what bothered me before will not bother me again. Maybe not.
Another thing I have to mention is that the UK's cover edition is really beautiful.
This book is not for everyone, but I have a feeling that if I'll be able to finish it and if the two other books will be just as good, then this will be one of these books I hold close to my heart. The kind that are not simple, the kind that is very tiring, the kind that makes you think and teaches you a valuable lesson, the kind you know has affected you deeply, the kind you will always be able to talk about.
A review copy was kindly provided by Penguin through NetGalley. This has not changed or affected my opinion in anyway. I'm, however, grateful for the opportunity to read such a book

This review also appears on: GoodReads, BookLikes, LeafMarks
Posted by The Accidental Reader at 11:31 AM