The Fallen: The Fallen and Leviathan by Thomas E. Sniegoski (book review by Shay) 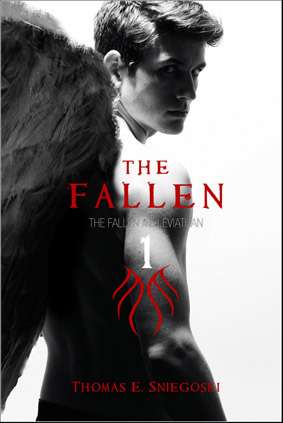 
THE ULTIMATE QUEST FOR REDEMPTION
On his eighteenth birthday, Aaron begins to hear strange voices and is convinced he is going insane. But having moved from foster home to foster home, Aaron doesn't know whom he can trust. He wants to confide in the cute girl from class, but fears she'll confirm he's crazy.
Then a mysterious man begins following Aaron. He knows about Aaron's troubled past and his new powers. And he has a message for Aaron: As the son of a mortal and an angel, Aaron has been chosen to redeem the Fallen.
Aaron tries to dismiss the news and resists his supernatural abilities. But he must accept his newfound heritage — and quickly. For the dark powers are gaining strength, and are hell-bent on destroying him....

I would like to start off and say that this was a good change of scenery for me and my books. The book wasn't the whole love triangle, I die for you- you die for me. This book was realistic and  it actually talked about family.

The book begins with Aaron. Aaron is this completely realistic character who I found to be a such a change. Aaron is an ordinary kid with an ordinary life until he turns eighteen. So Aaron comes from a normal family and even has a foster brother. Stevie, Aarons foster brother is a great character who I hope we will get to see more of later on in the series. Aaron has been himself lately. He hears things, and voices that he shouldn't hear. Speaking languages that he never knew before and  talking to his crush Velma the beautiful.

In the fallen Aaron is just starting to experience his powers he is getting glimpse of his potential. It isn't until Aaron is being followed that he begins to understand who and what he is and what destiny has in store for him. Aaron meets Zeke a fallen angel who has searched long and hard for him. Zeke gives Aaron exactly what he wants the truth, that he is an angel.
Next we meet the wick evil Verchiel who in my opinion is completely annoying. He has this crazy idea that he is God's almighty right hand of justice who must kill all fallen angels and their offspring in the name of god to cleanse their souls of eternal darkness and sin. Verchiel plays a role in this story as for he kills any off springs of angels who claim to be the chosen one, which is what makes him so annoying.
Now Aaron is developing his skills but is shortly stopped when Verchiel and his evil minions find him and kidnap his brother Stevie. Verchiel and Aaron battle it off in the last pages.

We are rejoined with Aaron, and the Angel Camael as they go after the Verchiel who kidnapped Aarons brother Stevie. Following possible leads to Stevie they end up in a creepy little town were the people aren't the normal. As excepted the book took a turn for the better leading up to Aaron using his powers to save the creepy town, but from what? As the title might help give a clue.

The Fallen and Leviathan:

I loved the book. The love that Aaron shares for his brother is what I love the most it was an epic love story of two soul mates finding each other or a forbidden love that would destroy them both. Instead we were give a actual realistic character to relate to who struggles with everyday life. Aaron is a genuine nice kid that speaks to us, he brings in a new prospective of the male mind in the world of angels. This is a great book I give it 4 stars and the Author 5 stars.
Posted by The Accidental Reader at 6:01 PM