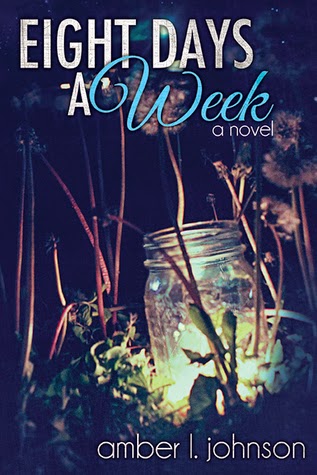 Gwen Stone has secrets she’s not ready to reveal. After a recent promotion at work, she needs a caretaker for her children. She’s frenzied and in a lurch and pretty much ready to hire the first person who comes along. So she does.

Andrew Lyons needs to get out of his sister’s apartment, and a Craigslist posting may be the answer to his prayers. But what he thought was an ad for a room rental turns into a job offer he can’t refuse. Accepting the nanny position could change his life, if only he had a clue how to be a grownup.

A working mother, a shirtless manny who looks good in a towel, two children who need more than than a babysitter, and hours of kids’ TV can only spell disaster for everyone involved.

Because a manny should always mind his own business.

And he definitely shouldn’t fall in love with his boss.

My Thoughts:
This eARC was provided by the publisher in an exchange for an honest review.
Eight Days A Week is an amazing fast read packed with lots of humor, sarcasm, sadness and change. Lots of change.
Meet Andrew an arrogant 25 year old teenager. He is selfish, arrogant, a poser and worst of all immature...left alone to babysit two kids. Not the best combination for most but he ends up doing one hell of a job.
Meet Gwen, a ''mother'' of two (you will understand the quotation when you read the book), career woman with lots of stress for her two little kids and job, until Andrew comes in the picture.
The plot takes flight from there and everything evolve into a beautiful love story and a man that changes himself, he becomes someone better because he needs to and wants to, and he wants it a lot. The background story of Gwen and the kids its truly amazing delivered in a way that made my heart swell from sadness and love at the same time.
The characters are so well developed that I actually cared about what would happen and how things would progress for them. It is, of course, visible that all of the characters in the book reach their personal growth and get what they were looking for, so for me that is simply amazing. It is not easy for an author to do that,but when it happens and better yet,when the reader understands it I love it.
The book was delivered in a writing so beautiful and livid, that had me turn the pages on an impossible speed. The plot was well crafted and I felt that I had all the time in the world with them. A little turn off was the fact that for me Gwen and Andrew grew into each other fairly quickly, kinda like a insta lovish, thus the 3 stars.
I totally recommend this book, because it is a page turner, fun and amazingly pleasant.

Posted by The Accidental Reader at 11:36 AM