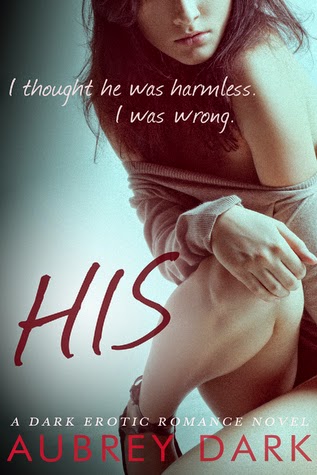 
I never meant to be here: tied up in bed next to a serial killer. When I followed him home, I was just playing Nancy Drew. Trying to find out
his secret. His kiss was intoxicating, and I thought he was harmless.

Author's Note:
This is a dark romance novel with mature themes that might make some readers uncomfortable.
My Thoughts:
To be honest, I don;t know what I expected from this book. I don;t know if I expected more violence, more abuse, more sex or just more. Despite the fact that Kat was an idiot and indecisive, I found myself enjoying this book a lot.
Meet Kat, twenty something university student, working at the local public library with her friend Jules. Kat in contrast to Jules, is simple, introvert and simple...or so we think. We get to know the background story of Kat as the book progresses. The author cuts to the chase pretty fast, when Jules dares Kat to kiss the first guy she will see in front of her...Gavriel.

I really wanted to like Gavriel a little more than I did, but something was missing.[ Lately, it seems that a lot of books miss something and I start to wonder about the quality of the books that I read.]
He was dar and disturbed and a total psycho with a dark background, pretty much the same as Kat's, but I think he softened pretty fast and easy.

There is a lot of attraction, pretty much since page 5, but despite all the tension there isn't anything huge there. It was kinda of insta love,for me at least, which I hate but the story progressed steadily. If that makes any sense. The annoying thing was that the days in the book seemed like they were the same. Same routine for Gav and Kat, only some actions changed and the conversations that were pretty interesting. Gav had some interesting ideas for what each person is and how he sees humans. Also, I don;t think I will see a doctor with the same eye again.

The characters were complex but Kat turned me off a lot with her indesicive character and what she thought she knew and what she didn't. She did not know if she pretended to like the murderer or not for pretty much 80% of the book. The story is told in alternative POV's which is awesome and something I L.O.V.E.

The writing was very good and the sentenced inviting and I really enjoyed reading this book. Some sentences and phrases seemed to repeat themselves over and over in both POV'S as well.
I don;t want to discuss the ending which was explosive and then a little weird and dump.

So, 3 stars for this good dark romance!! Hope you enjoy.

Posted by The Accidental Reader at 7:38 AM