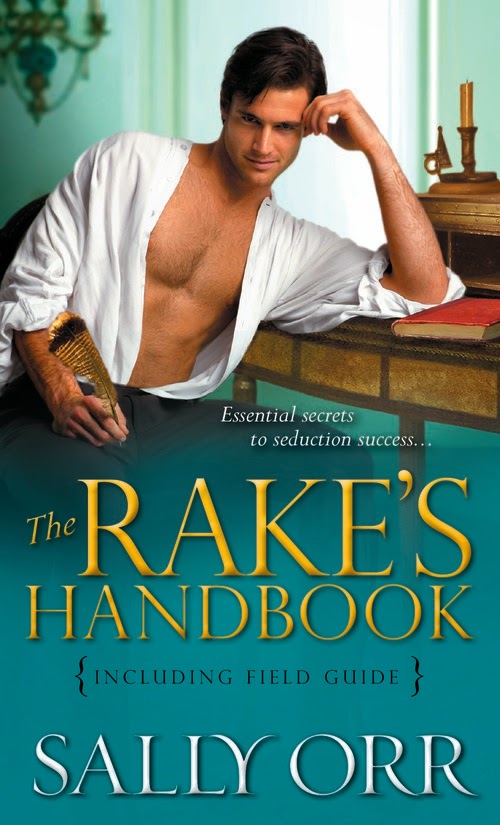 The Rake’s Handbook (Including Field Guide)
By Sally Orr
Sourcebooks Casablanca
November 4, 2014
$7.99/£5.99
Summary:
The definitive guide to seduction…
The Rake’s Handbook was written on a dare, and soon took the ton by storm. Now its author, Ross Thornbury, is publicly reviled by the ladies—who are, of course, forbidden to read the handbook—but privately revered by the gentlemen. Unfortunately, Ross’s notoriety is working against him and he flees London painfully aware of the shortcomings of his own jaded heart.
Spirited young widow Elinor Colton lives next to Ross’s country estate. She’s appalled not only by his rakish reputation, but also by his progressive industrial plans. Elinor is sure she is immune to Ross’s seductive ways. But he keeps coming around…impressing her with his vision for England’s future and stunning her with his smiles.
How does one resist the man who wrote the manual on love?
About the Author:
Sally Orr worked for thirty years in medical research, specializing in the discovery of gene function. After joining an English history message board, she posted many, many examples of absolute tomfoolery. As a result, a cyber-friend challenged her to write a novel. Since she is a hopeless Anglophile, it's not surprising that her first book is a Regency romance. Sally lives with her husband in San Diego, surrounded by too many nerdy books and not enough old English cars.
Social Media:
Website | @OrrSally | Facebook | Goodreads
Pre-order:
Amazon | Barnes & Noble | BAM | !ndigo | IndieBound | iBooks
Rafflecopter Giveaway – Two copies of The Rake’s Handbook (two winners, ends 11/7)
GIVEAWAY PRESS THE LINK AND ENTER.
Yep yep yep! there is a giveaway, and you are welcome to participate. However, The Accidental Reader is not responsible for the winning or the giveaway. We are just hosting the link.
Excerpt:
“You really are a rake,” she whispered, the sight and feel of their joined hands warming her cheeks. “A proper gentleman would never hold a lady thus. I have been warned about your charms. Perhaps I too should write everything down. Pen a handbook to instruct my widowed sisters what to expect upon attempted seduction and how to fight it.”
“Factual or satirical?”
She bit her lower lip to stop an indelicate reply.
“I could write that handbook too.”
His boast made her smile. “I seem to have found another trait of a rake.”
“Humph. I’d be delighted to show you all of my traits. Perhaps start with chapter one?” The determination in his voice indicated he was quite willing to comply.
“Please do, sir,” she replied in a facetious tone, tugging her hand free. “But I can already tell that I’ll stop reading your book after the table of contents. You know, all of those funny pages in the front of the book numbered v and i.”
He chuckled softly, then stared at her until he captured her gaze. “My handbook starts with fine eyes.” He reached up and swept back a ringlet that had fallen over her eye and carefully tucked the curl under her bonnet.
Her heartbeat raced.
“The eyes are followed by a notable vee.” His gaze lowered to the upper edge of her bodice and lingered in the center.
“Oh my, if that’s the table of contents, I don’t dare read chapter one.”
“I’d be pleased to read you all of the chapters. There are a total of . . .” He glanced at her leisurely, from the top of her leghorn bonnet down to her sensible half boots. His focus returned up to her neck—almost. His chest broadened as he inhaled. “Ten.”
“Ten.”
He gave her a smoldering look from under heavy lashes. “Ten in volume one,” he continued in a silky baritone. “Let’s start with chapter one.” He leaned forward slowly, staring at her mouth, as if he might take liberties and kiss her. The distance between them shortened to inches. Close enough to feel his warm breath.


NO! what a cruel way to end an exceprt! I want more, don't you?
Posted by The Accidental Reader at 10:00 PM