Book Review: The Unbecoming Of Mara Dyer by Michelle Hodkin 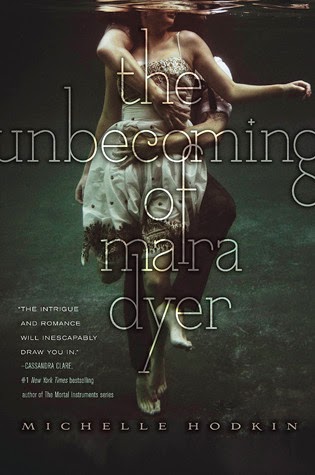 Mara Dyer believes life can't get any stranger than waking up in a hospital with no memory of how she got there.It can. She believes there must be more to the accident she can't remember that killed her friends and left her strangely unharmed. There is.She doesn't believe that after everything she's been through, she can fall in love. She's wrong.


My Thoughts:
It had been some time since the last time I actually read a ''real'' young adult book and The Unbecoming Of Mara Dyer made me love them and hate them at the same time all over again.
The story was promising and it promised a lot to me and it had me captivated with just one small sentence. If I love something that is horror films and horror books (Stephen King) and I love the paranormal element, it's what makes me pick up a book most of the time.
The writing was magical. The author achieved an incredible description style that requires few words and leaves the rest to the imagination of the reader, letting the scene free to be comprehended and imagined different from each one of us. It was scary and the element of horror was there.
Mara and Noah as the main characters of the story were real. What I didnt like a lot was the cliché ''troubled girl meets amazingly-rich-British-womanizer-guy who of course happens to hide a secret of its own. Cliche much?(It took me a while to get to like Noah). The conversations between those two were clever and funny with a lot of humor and sarcasm hoping along on the way. The entire story plays around the same school as Twilight, Hush-Hush and every other paranormal YA book out there. Somewhere here I started noticing that the story started taking a different turn.
For me the horror element in the story had a lot of potential. It could take 15 different routes and explote 15 different things and it still would be awesome as long as Mara did not become one of those girls that kind of revolve around their crush. Suddenly, everything was around Noah. Feminism was a book  Mara closed and threw in the garbage in the name of love.
Her mother from an annoying b*** became a lenient girlfriend that did not object Mara going out as long as it was with Noah (15 mins ago she could not even get out of the house to go to school without the usual interrogation).
Apart from the sizzling romance...ok I am joking...the emotions were strong. Fear was there, in a lot of scenes I was trembling with anticipation although, it was pretty obvious what would happen next. Curiosity on Mara's part made me cringe because she was curious about the most obvious get-the-hell-away situations ever. Ugh!
This is your classic Paranormal book that will appeal to all the fans of Hush Hush, Twilight and all the rest of this genre, despite the romance that made me gag at times I will be reading the second book of the series because the ending left me curious and I need to know what will happen.
Until next time.

Posted by The Accidental Reader at 5:41 PM