Book Review: A Match Of Wits by Jen Turano [Review by Sharon] 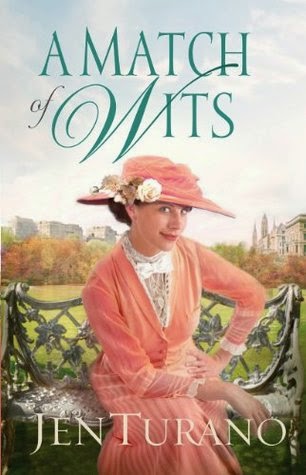 "Lively and Humorous Historical Romp from an Acclaimed AuthorTwo years ago, Zayne Beckett's departure from New York City to meet up with his almost-fiance caused Agatha Watson no small amount of grief. So he is the last person she wanted to stumble upon in her travels as a reporter with the New York Tribune. Looking worse for the wear, he clearly needs to be taken in hand and taken back East to his family. Even though she's over him, Agatha can't help feeling sorry for him and realizes she'll have to be the one to get the stubborn man back home.Zayne has no desire to be taken anywhere. Content to sit and mope over his recent bad fortune and the desertion of his not-quite-fiance, he's prepared to drag his heels all the way back to New York. That is, until he and Agatha find themselves slipping back into the strangely enjoyable bickering and bantering of their old friendship.It isn't until they arrive in New York City that Zayne realizes Agatha's determined nose for news has earned her a few enemies. When his attempts to repay her for helping him go sadly awry, Agatha proves herself just as stubborn as Zayne. Everyone else may think them a match, but nothing could be further from the truth--until Agatha finds herself in real trouble. Have these two stubborn, too-smart-for-their-own-good people been meant for each other all along?"

Well this was one cute funny ride. I mean, I never knew NY city was like that.

When I think of historical romance I usually think of dukes and seasons and courting and all wonderfull things but I never thought what happens in the USA around that time. Maybe because I'm ignorant, mostly because I didn't care.

But this book was a wonderful discovery, it was funny and well written and I liked Agatha and Zayne and thier interaction. Agatha was such a busy-body with crazy ideas she drove me insane but I liked her still.

And Zayne with all his brooding smar ass hero attitude was fun. I just loved it!

First of all, and spirited as Agatha was I kinda felt it was a bit over the top (which, yes, made me hold back in half a star) but what disturbed me even more was the religion- "God, and god and god" and sometimes "the lord".

I do believe in god, but I also believe in myself and in the people around me. Anyhow, it is not my intention to talk about religion.

What I'm trying to say was that I felt that religion was a big issue in the book so very very big it was almost suffocating. Starting with Agatha's belief and Zayne's lost one which he retrieves by the end of the book.

So yeah, that part was not for me. I did however love the feminist spirit of the book and all the fun moments.

A review copy was provided by Bethany House through NetGalley in exchange for an honest review.

Posted by The Accidental Reader at 3:15 PM