Book Review: Since Forever Ago by Olivia Besse 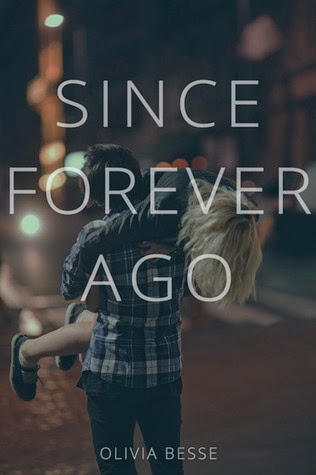 Fresh off the heels of a devastating breakup, Riley Benson is a mess. But with her ingenious plan to become a ball-busting heartbreaker herself, she’s pretty sure she’ll survive. After all, what better way is there to get revenge than to move on?

Riley’s determined to become the perfect bachelorette—she’s going to drink like a bro, belch like a beast and swear so much that she’ll make even the most seasoned sailors blush. After all, those are the qualities that every guy’s secretly looking for…. aren’t they?

Max Fletcher is in love with the girl who gave him chicken pox and his first broken leg. When his best friend seems to finally be out of the picture, he can’t help but want to keep Riley all to himself. And, after coaching her with the very best of the very worst love advice, it seems as if he might actually get what he's wanted after all those years. But just as the two come to the realization that they're actually kind of perfect for each other, along comes a secret that threatens to tear them apart.

My Thoughts:
This ARC was provided by Wunderland Press via NetGalley in exchange for an honest review.
I really tried to like this book. I heard that it was different from any other New Adult books but I was so disappointed and annoyed.
Meet Riley, she just broke up with her 6 year boyfriend because he was cheating on her and the author through a 3rd person POV takes us in a journey with the most annoying, clueless, immature 21-year-old out there. Yes. Amazing.
To quote the author from her comment on goodreads :
“Hey everyone! I'm not trying to make any excuses, but I DID want to provide an explanation in regards to the manner in which I approached this project. My ultimate goal was to write a NA novel with characters who were relatable and realistic, and early reviews have [hopefully] confirmed this!
Unfortunately, many reviewers have provided feedback that they could not stand the characters in this story due to their being whiny, immature and a little bit clueless. In my opinion, however, all of these attributes define a large proportion of the current 20-something population, and I wanted the characters in my book to portray what new adults are actually like. ”
So, the new adults that she portrays in her book act like clueless 16 year olds that think the end of the world is upon them because they just broke up with their boyfriend. The condemn themselves to a series of dates just because they want to get back into game and because they want to gain the experience they never had in this field? Like seriously?
I saw the entire story unfold in front of my eyes without even reaching the middle of the book (I dropped it at 25%), it was so common and predictable. In my opinion I would prefer if the book was targeted for YA rather than NA. What guy (20 something y.o.) would wait and make such a plan in order to confess to the girl he likes? None. I think he would already hooked up with her because thats how 20 y.o's act these days. There are immature people out there but not like that and they are not this annoying and so so so so CLUELESS.
I felt that the emotions portrayed in Since Forever Ago were flat, situations passed over and not explained enough, and the break up which is one of the major events and what triggered the entire plot is not described appropriately and we don't see the aftermath. The emotional effect it had on Riley is almost not there.
This book is a waste of time and totally not worth it. The 2.5 stars are for the little humor and the esoteric monologues that I had some time to read a book with them.
Efterpi
Posted by The Accidental Reader at 10:37 PM