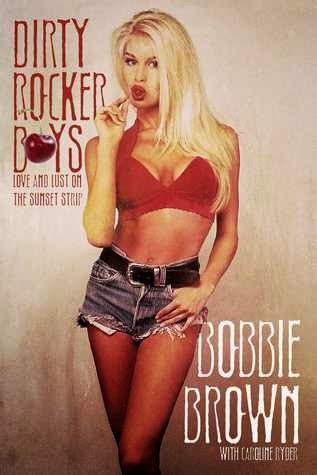 Who could forget the sexy 'Cherry Pie' girl from hair metal band Warrant's infamous music video? Bobbie Brown became a bona fide vixen for her playful role as the object of lead singer Jani Lane's desires. With her windblown peroxide mane, seductive scarlet lips, and flirtatious curves, she epitomized every man's fantasy. But the wide-eyed Louisiana beauty queen's own dreams of making it big in Los Angeles were about to be derailed by her rock-and-roll lifestyle. . . .

After her tumultuous marriage to Jani imploded, and her engagement to fast-living Mötley Crüe drummer Tommy Lee ended in a drug haze-followed by his marriage days later to Pamela Anderson-Bobbie decided it was time Hollywood's hottest bachelors got a taste of their own medicine. Step one: get high. Step two: get even.

In a captivating, completely uncensored confessional, Bobbie explicitly recounts her encounters with some of the most famous men in Hollywood: Leonardo DiCaprio, Kevin Costner, Mark McGrath, Dave Navarro, Sebastian Bach, Ashley Hamilton, Rob Pilatus of Milli Vanilli, Matthew and Gunnar Nelson, Orgy's Jay Gordon, and many more. Who's got the most titanic dick in Tinseltown? Whose bedroom did Bobbie (literally) set on fire? No man was off limits as the fun-loving bombshell spiraled into excess, anger, and addiction.

Bobbie survived the party-barely-and her riveting, cautionary comeback tale is filled with the wildest stories of sex, drugs, and rock and roll ever told.
My Thoughts:
This book contains strong language, descriptive sex, drugs, booze and disturbing scenes.
It was one of those boring evenings that I had nothing to do but youtubing random things...from how to's tutorials to music to top 10 things etc etc and then I found myself watching the first season of Ex Wives of Rock. Two of those ladies seemed familiar to me. One of them was Athena Lee which I had seen live with her then husband James Kottak of Scorpions at a Scorpions concert in Greece in 2008. Yay. The other one was Bobbie Brown and I remembered instantly from the video clip of Warrant, Cherry Pie.

To be honest I;m not into reality shows, I think they are stupid and pretentious and that there is no reason for someone to go on live TV with their personal lives especially if they are famous (they are all over the tabloids anyway). That , I realized when I was in the 7th episode of the show. Yay. And here;s how I ended up reading this book.

Bobbie went on and on about her book and how it failed with one of the publishers etc etc. During the show she says how Pamela Anderson stole Tommy Lee from her and how she was married with the late Jani Lane, lead singer of Warrant. I was intrigued ,because, if I like one thing its autobiographies.

The book was a drama, coming from a broken family, Bobbie was one thing but rebel. She was shy and she had boyfriends but not as many as we would probably think. She came second at the beauty pageant
competition and from then her fame skyrocketed. Agents called her from Los Angeles to model for them and soon 20 year old Bobbie found herself in the City Of Angels, a shy Louisiana girl turned into the most sexy and confident woman and then her downfall began.

It seemed to me that Bobbie had so many opportunities to make big in the scene but her desperation for love and acceptance came first. From what I realized she didnt want to be alone almost never, she always had a boyfriend and if she didnt, she would have sex with someone. She did a couple of video clips for some bands and when she landed the deal with Warrant she became so famous but that only came back to bite her in the ass. She got pregnant from Jani Lane and they rushed into a marriage that none of them was really sure if it would work (and it didnt). That experience alone it would mess up any sane person out there. Jani was over the top, came home drunk, cheated, lied, didnt have sex with her (which she hated) and she became such a b*** that it was disturbing. In the end their marriage failed and Bobbie with a 2 year old kid was moving back and forth all the tme between Louisiana and Cali. But while I was reading all of this and It was a big portion of the book I felt nothing. It was written in non descriptive way, with sentenced composed by a five year.

Meet Tommy Lee. I wont say a lot about this but in my opinion this was the most explosive relationship ever. Both made huge mistakes and both had issues and drugs didnt help at all.
It was like every rock relationship should be like. Sex, drugs and rock n roll with a touch of continuous fighting.

Bobbie Brown was a really kind, sensitive and a good woman that went after the wrong men. Men that she hoped they would provide what she needed but eventually they didnt.

The writing was ok if you consider she used a ghost writer but the dialogues didnt seem real, like they never happened or they were changed. The emotions were kind of flat for a memoir and in the end it left a bitter taste because you realise that Bobbie wasted 15 years of her life, her best years like someone would say, on finding the perfect boyfriend, drugs and constant self sabotaging. She would have made it big if she was a little more down to earth. I just felt sorry for her.

Efterpi
Posted by The Accidental Reader at 10:58 AM